- December 18, 2012
A couple of weeks ago the children received a parcel in the post. Inside amongst some snow and candy canes was an invite to a special Christmas Party hosted by Littlewoods with a special guest... of course Big Boy and Top Ender were very excited about being invited and even more so when I agreed that we could go! We travelled down by train, keeping ourselves amused by making up stories about other people on the train and finding a cup for Big Boy to relieve himself in when we found the train toilet to be out of order... 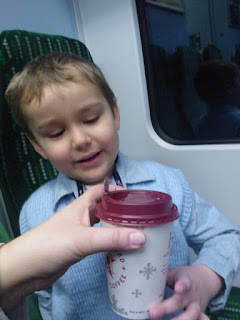 The answers that some of our friends on Facebook were giving as to what they thought the cup contained kept us amused right up until we walked into the party and there sitting on a throne just for him was SANTA. 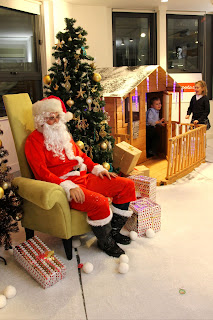 Although Big Boy and Top Ender have reliable informed me that this wasn't actually Santa, because he was too skinny, too young and the real Santa would be too busy to go to a Christmas party in the run up to Christmas... too clever by half my children. Top Ender and Big Boy didn't say this to Santa of course (just in case) and were most pleased when Santa gave them a gift. The delight in Big Boy's face is obvious and I'm so thankful to the lovely photographer who managed to capture this. 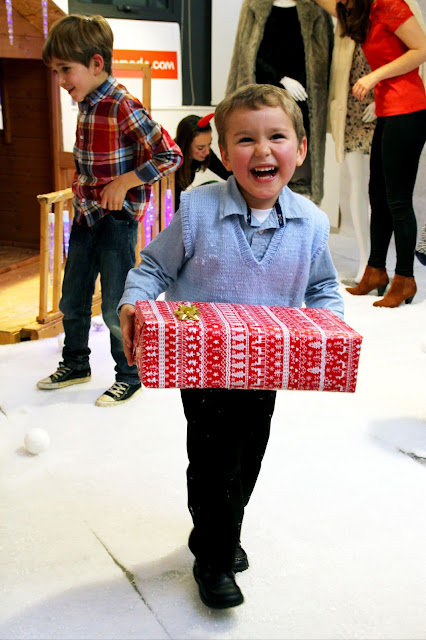 We had a great giggle at the party, which was followed up by a walk down Regent Street where Top Ender, Big Boy and I sang "The Twelve Days of Christmas" and actually got several others walking down Regent Street to join in (it was so surreal, but I didn't dream it, Londoners actually joined in and smiled!). Big Boy managed to top this by having an entire tube carriage listen to his tale of the Christmas party and wish him a Merry Christmas when we got off (Christmas does great things to Londoners).

And I don't care if Santa wasn't as fat and old as he should be, I still think it was a fun Christmas Party! 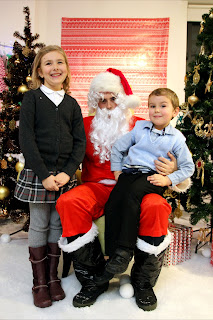 On a side note that is kind of related, Big Boy is completely in love with Littlewoods because of his new curtains that arrived (they're Mario) and even though I ordered them, paid for them and even hung them it's Littlewoods that are getting all the credit.

Littlewoods paid for our travel to the event, fed us Mince Pies, gave the children some rather lovely gifts and kept some of the other bloggers invited plentifully supplied in Mulled Wine.