- December 09, 2012
The one thing that I learnt from not posting a meal plan last week is that if I don't post a meal plan my family and I really have no clue what we are doing. I didn't make a shopping list when I went to the supermarket, I didn't know what I was cooking each day and we were quite terrible and had take out a couple of times even though we knew we shouldn't. Still this week I at least had the meal plan in draft before I went shopping so I knew what I should be buying, and I even managed to remember to buy some snacks such as the Lord Poppington Popcorn Daddy and I had been munching on (and enjoying) earlier in the week! 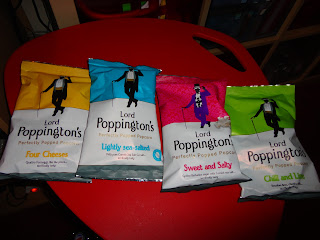 Saturday - Fish and Chips Home Made


Last night we had Home Made Gluten Free Fish and Chips. I was supposed to cook it, but I spent some time with my sister and my Mum (who has a terrible cold) and so Daddy ended up making it. It was lovely and even though Daddy has once again admitted that he really isn't keen of fish he did enjoy his fish supper.


We are nearly back to having Chicken Roasts once a week and I can't say I won't be glad, not having Chicken or Turkey for the last few weeks has meant we've had to buy a more expensive joint of lamb or beef and  my budget just can't take it! Although saying that, last week and this week we went with Daddy's favourite of Pork Chops (actually loin steaks but we still call them chops!) which after being grilled are given a teaspoon of apple sauce on one side and a sprinkle of grated cheese on top of that. They are rather delicious even if they should be a once in a while treat!


Everyone in this house loves lasagne and so after I get back from Church with Big Boy and his classmates I'll come home and make a couple of Lasagne's. Hopefully if I can stretch it to two then I can freeze one for use in the future as it's so much better for us that when I'm feeling like I can't be bothered to cook, that I can grab a home made meal out of the freezer.

Tuesday - Beans on Toast with Egg


We're at the Milton Keynes Panto on Tuesday night, so I'll give the children Beans on Toast with a poached egg (actually I'll have the same too) as it is quick, easy and quite well nutritionally balanced according to a teacher I once had. Daddy will eat something big at work so that he can have a sandwich when he gets in, before we disappear to the Theatre.


I've got a choir rehearsal this evening (I know, I know!) at the Chapel for a performance this weekend (Service project, going to an Old Folks Home with Primary isn't that cute?) and so I thought we'd need something quick and tasty. Both Big Boy and Top Ender have recently decided that they like Beef Burgers, so I thought I'd class them up with some Potato Rosti and Broccoli and it would be a great midweek meal.


I am such a big Honey Mustard Sauce fan that I thought it would be great to do a slow cooker version of the drumsticks we had the other week. I'm cheating and using the low fat Chicken Tonight version of the sauce as it makes it so much easier for me to calculate how many carbs Big Boy is eating compared to my home made version.


We haven't had Taco's for such a long time, and I love the trays as they make it so much easier to load and as they are Gluten Free it's a really simple meal to cook. I think that it's a great Friday night meal and as we've been invited to a Christmas Party they would also mean we didn't pig out on all the Hors d'Oeuvres. Plus it means I get to put this picture of Daddy enjoying his food up again... So that's my week of meals. What are you planning this week?