Rise Of The Guardians - Game Review

- December 19, 2012
I mentioned the other night that Big Boy is really in to computer games at the moment. He has decided that when he is older he'd quite like to design video games and has figured out that what he needs to do now to make that happen is play as many video games as his Daddy and I will let him. I'm a great believer that everything in moderation is important and so we do let Big Boy play computer games most evenings, even if it is only for ten minutes. This way we all get what we want and I can see that Big Boy is improving with his reading skills as he reads different things that appear on screen when he is playing the games.

Big Boy has been seeing the trailers for the film Rise Of The Guardians and has been excited about it and our trip to go and see it during the Christmas break and was most excited when we got a copy of the XBox game to review. 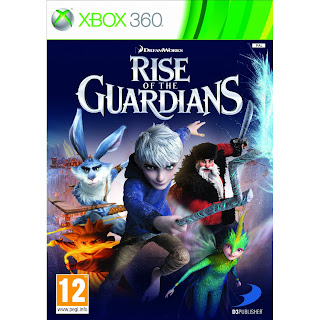 Big Boy sat down with me to start playing the game, despite it being a PEGI12, and he and I started to play together having chosen our favourite characters (I was North). Whilst it was really easy for Big Boy to control and he understood what he was doing he soon got really bored because he didn't want to be just fighting all the time, which is what the time we spent playing the game felt like.

I've been playing the game myself and getting Daddy to join in when I reach a particularly hard character to beat, as an additional three characters can join in or drop out of the game as they like. I think that this game is a bit more suited to older children, or gamers like me who aren't really that great but like to think they are!

We were given a copy of the game to review.