- June 24, 2019
As many of you know, over on Facebook, when the mood strikes I post a random question. The question, of course, is never actually random if you follow my thought process. You can see how thinking about children, fizzy drinks and the position you sleep in, lead me to ask something like What colour is your toothbrush right?

Just me eh? Well, it's normally something I've been thinking about for a day or two and want other people to weigh in on too because my brain is, well as you can see it's a little random and I'm never sure if people think the same as me and I'm also super nosey!

This last week I wanted to know what people kept in the butter compartment of their fridge as in ours there is Insulin. 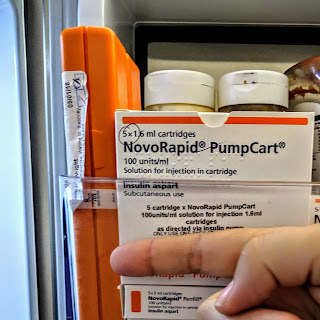 It's what happens when you live with a Type One Diabetic, every spare bit of space is given over to the equipment that they need, which is why in my handbag, the glovebox of my car, in Top Ender's handbag, my church bag and a million other places there is Dan Jon's diabetic equipment.

Anyway. I wanted to know what other people kept in their butter compartments and so asked.

I was shocked by the replies.


I was shocked that so many people didn't know that they had a butter compartment!

I even had a couple of friends let me know that they had used my question as a question for their colleagues and had found out that they were having to educate them on what a butter compartment was!

So, what do you keep in your butter compartment?!
Diabetes Family Life