- June 11, 2019
Top Ender and I haven't been to the Theatre together in ages and so we were really pleased to be able to go to see Thriller Live last night, courtesy of Milton Keynes Theatre who gave us two tickets and a complimentary drink each too. We were excited as we headed to the theatre and not just because we had a pack of sweets in my bag!

Growing up, my sister and her best friends were huge fans of Michael Jackson and so, I grew up hearing his music, even if I wasn't particularly a fan myself. I mean, of course, I knew who he was and could sing along to his hits, and for Top Ender it's the same as it is almost impossible to not know some of his or the Jackson Five hits as they were practically played non-stop on every radio station until very recently and we have that Michael Jackson Wii game that we do actually still play every once in a while. Top Ender has performed a few Jackson songs as part of the School Orchestra and even in some of the Choirs that she performs in too, so we knew that whilst this production wasn't a life story that we'd know some of the hits and would probably be able to have a bop along to the songs and an enjoyable time together.

We weren't wrong. In fact, we may have underestimated just how much fun we would have.

I honestly thought that we were going to come back and I'd tell everyone that it was good and that be the end of it, but from the very start to the very end the whole production was/is amazing with dancers who clearly love their job and singers who perform hits which suddenly I knew every word to and I honestly wanted to get up and dance.

I never want to get up in the Theatre and dance.

The show is a kind of mix between a revue and a concert, and of course, all the great hits are there, as well as the famous dance moves (Yes, I mean the moonwalk, the crotch grabbing, the hat tilt and the Smooth Criminal Lean) and the favourite of everyone trying to be Michael Jackson with the vocal "Oww!" "Shamone!" and "Hee-hee!" being thrown in every few minutes.

Which brings me to the one song that everyone HAS to know the dance routine to. Yup I'm talking about Thriller. Top Ender and I knew that when Thriller was performed, there were going to be Zombies in the audience. It was a given right?

Well, at first we didn't think so as some women who were dancing by the doors on the opposite side of the auditorium to us weren't told to sit down. Then, I heard one scream, I looked over and sure enough, they were rushing back to their seats after having been frightened by a Zombie who was lumbering after them...

Top Ender was sitting in a seat on the Aisle. Top Ender who, everyone at Church knows not to shake hands with because she can't do the physical touch thing (It's an ASD thing) and really doesn't like her personal space being invaded... 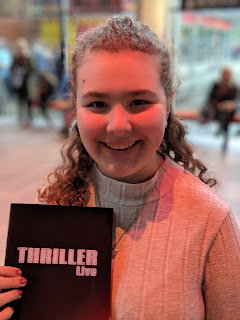 I managed to warn her that Zombies were coming just in time for one to come from behind us and head straight to her. It was like an instant attraction thing, like that scene in Romeo and Juliet with the fish tank, where the Zombie saw Top Ender and just came straight for her and stood bent over almost nose to nose with her.

They stared at one another, eyes locked for a lot longer than I was comfortable for, and if it had lasted for much longer, I was going to insist the Zombie marry her or point out that she is only 15, but eventually, he moved away, frightening a lady sitting in another section by jumping forward before rushing up on to the stage.

Top Ender admitted as soon as the zombie moved on, who we are pretty sure by the way was wearing a Michael Myers mask, that he had accidentally stood on Top Ender's foot, but she insisted that she hadn't/didn't mind the pain, as it helped her focus on not punching the poor chap for invading her personal space and gave her a reason to stare back at him. "Plus his breath didn't smell", which seeing as they were seriously almost nose to nose is probably a very good thing.

After Thriller, the cast informed us we could take photographs, but we also had to get up and dance and the whole audience did just that, singing along and really enjoying the party atmosphere. 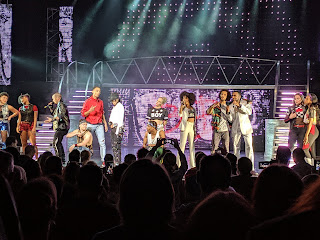 The show is at Milton Keynes until the 15th of June, so hurry along to see it!

As mentioned at the start, we received free tickets to the show and some free drinks in exchange for a review on this here blog. You can read my disclosure policy if you want to find out more.
Date Night Family Life Review Theatre