- April 04, 2019
Last Thursday, AKA Bin Day I MAJORLY embarrassed myself and because I know you like to live vicariously through me, here are all the details.

So, in Milton Keynes, we have Green Wheelie Bins for Green waste. They are about three foot tall and, well Flyfour and I fill it with the waste from the garden. You know, grass clippings, weeds, bits of the trees I've cut down, leaves and dead flowers too. Any food waste goes in too, so it's often full of bits of bones, egg shells, bits of Spring Onion, Veggie peelings, fruit waste etc. 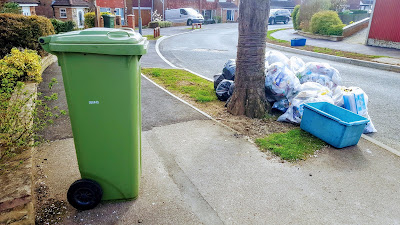 The end result is that the bin can erm, well it can stink and so I'd made the executive decision that this week as the bin needed a wash and it was sunny and would dry quite quickly, as soon as it was emptied I'd give it a good clean and hope I didn't get covered in the gunk because then I'd stink too.

I heard the green waste lorry come about ten minutes before I ventured outside, so I went to bring the bin back onto my driveway so I could give it a little wash.


I was singing and dancing because, well;

A: I'm a dweeb and
B: I have "A Cover is not the Book" stuck in my head (Mary Poppins) and
C: I don't need your approval.

As I went around the side of the bin, reaching the crescendo of my song and dance routine, there sat on my garden wall was one of the Bin Men from the recycling and general waste collection lorry, who was sitting awaiting his workmates to catch up with him.

You see to speed up the process, one of the guys tends to go up and down the roads that they are scheduled to visit and put the bin bags in a large pile outside one house. That way instead of making twenty million different stops, they can make just a few. This week it was my house that they had pilled the bags up in front of and the man was making the most of the time he was waiting to enjoy some sun by sunbathing whilst on my garden wall.

Nothing wrong with that of course.

Apart from he had a rather large grin on his face and was clearly enjoying the performance.

I can never go outside again ever.
Family Life Funny