Dan Jon And The Girl in a Kimono

- April 23, 2019
When we went to the Rijksmuseum in Amsterdam, we all sort of split up to look at the art ourselves, looking at pieces that interested us rather than forcing everyone to look at the same piece for the same amount of time. We all stayed in the same room, and Flyfour and I ensured that we had a view of each of the children. It's a tactic we use quite often in Museums and Art Galleries, as we've been taking the children to them since they were tiny and know that all four of us have different tastes, opinions and interests.

We had barely got into the museum when Dan Jon came to take me over to appreciate a piece of art that he had found. Or rather, he didn't want me to appreciate it, he wanted me to look at it and tell him what it reminded me of. 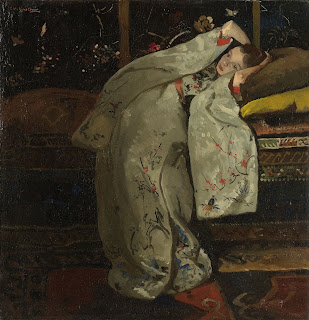 As I stood looking at one of the 13 "Girl in a Kimono" paintings by George Hendrik Breitner, Dan Jon stood by my side eagerly waiting for recognition to cross my face. All I could think of was how the girl was posed how Dan Jon and I sleep and so I said that.

Dan Jon was immediately pleased and quickly showed me a picture that had "miraculously appeared" on his phone of him sleeping (Yes, he knew I'd taken it!) in the same position a few days before. 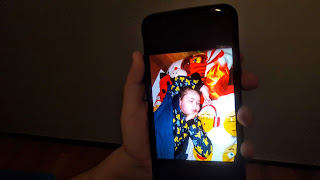 It's good to see that Dan Jon and I have such a great eye for art that we recreate it without even knowing!
Family Life Funny Paid Day Out