- April 09, 2019
Last Friday evening one of Top Ender's friends asked if I would mind giving him a lift home. I didn't mind because he is a great friend, a great young man and he only lives five minutes away. In fact, if we hadn't of moved from the home we lived in before the home we are in now, we would have practically have been neighbours living just a minute walk away and probably would have been able to wave to each other from various bedroom windows!

Top Ender and I had planned on visiting her Nanny after School, for a few minutes to say hello and to drop off some of her artwork which we had at our home. She too had moved on to the estate we had previously lived on and again, had we not moved we would have been able to have seen her home from our previous home! She, however, wouldn't have been able to see us as she is in a bungalow!

It's actually a great estate as one of my best friends also moved onto it a year or so back. Again, had we not moved, we would have been able to see her home from ours... in fact, you can see it from my Mother-in-laws home! 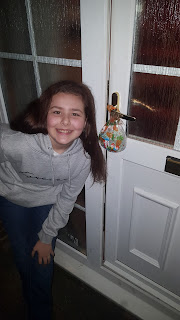 As Top Ender and I drove from her friends home to her Nanny's home, we were deep in conversation. We were talking about things that had happened at School, things I had done, things we were planning on doing during the Easter break, things that we had saved to tell each other... basically we were having a good old natter.

It was when I started getting out of the car and Top Ender just sat there looking at me puzzled that I realised something was wrong.

I took a look around me.

We weren't at my Mother In Law's home.

We weren't at my home.

We weren't even at my friends home, who lived nearby.

No, I'd driven and parked at my old house.

I hastily got back in the car and claimed it was muscle memory... I'm just glad that the new owners weren't home!
Family Life Funny Making A House A Home