The Change In Eating Habits

- April 20, 2019
When I first started doing random food challenges in February, it was because I wanted to change the way our family ate. I wanted our family to be more healthy, to eat a wider range of foods and because the odd occasional change up means that I focus much more on what we as a family are eating and I can sometimes knock some of my unhealthy habits on the head...

It generally works. Now, for example, we eat a wider range of Fish dishes, a wider range of vegetables (even if Flyfour still occasionally moans about them!), the whole family are more willing to try new things (rather than going out to a restaurant and picking the same three dishes our whole lives or the same sandwich fillings) and I may have accidentally given the family an addiction to Salad.

Seriously. They are addicted to Salad. 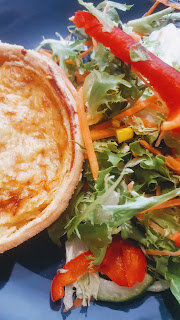 The first time I really realised that there was an issue, was when a week or two after stopping eating Salad every day Flyfour became bloated. We thought at first he was allergic to dairy but some experiments have mostly ruled that theory out and I started to develop a hypothesis that Flyfour's gut had become used to the higher fibre and leafy greens it had been processing.

Then whilst we were away in Amsterdam, I noticed the children were picking sandwiches with salad items in or more surprisingly, to me at least, were picking pre-packaged salads for their lunch. 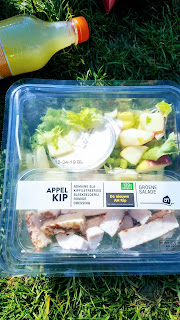 As we sat one Sunny day on the roof of an Albert Heijn (it is our favourite supermarket in the Netherlands and this particular branch was our favourite place to get our lunch and then picnic at), I mentioned to Flyfour, between mouthfuls of a particularly great salad, how I had missed eating Salad every day as we did in February, and had done for the few days we'd been away together. Both Flyfour and the children agreed and were glad of my suggestion that we eat more Salad upon our return to the UK!

I know that in the grand scheme of things this isn't anything major, but it has given me a new onus to ensure my family eat more salad and veggies and renewed my avidity for making meals from scratch and as colourful as possible.
Family Life Food Gluten Free Lunch Main Meal Meal Plan Self-Improvement