- April 05, 2019
It's well known in our home, that I'm pretty sure I can time travel. I found a picture of a child who looks like me in a book once and I've either forgotten I can time travel, or the theory Top Ender has, where Time Travel is invented in my lifetime and then I go back and take younger me back in time (goodness knows why) hasn't happened yet, which is why I don't remember it...

Now, it's not just me. Yup, now we know that Dan Jon Jr is also a Time Traveller and he too doesn't have any memory of travelling back in time, but we have photographic evidence. Again!

It all started the Saturday evening before Mother's Day. I was pretending to watch TV with Flyfour, but really I was scrolling through Facebook. I came across a picture in a local group I belong to from 1988 and had been taken from the Living Archive of Milton Keynes. The picture had caught my eye, as I knew where it was taken (which is unusual for me, having not grown up in Milton Keynes) and as I was looking, I saw Dan Jon in the picture.

Seriously! See if you can spot him. 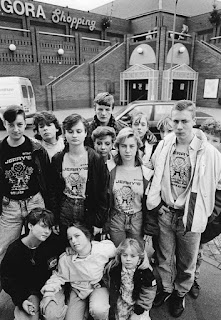 Did you see him? He is peeking over the shoulder of the young man standing on the right of the image.

Pointing him out to Flyfour, we had a good giggle and of course, there was only one thing we could do. We immediately called Dan Jon and Top Ender downstairs and asked them to look at the picture, pointing out where Dan Jon was hiding. They agreed, that was 100% him and he was obviously a Time Traveller just like his Mother.

Well, there was only one thing for it wasn't there? Seeing as it was Mother's Day the next day and the children had to do what I wanted, we went and recreated the picture, just minus all the other people, to prove it was Dan Jon. 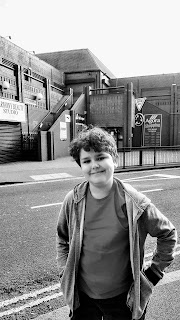 I think this second image speaks for itself and I'll be making sure to look at all old photos a little more carefully from now on, to triple check that one of us isn't hiding in the background!
Family Life Funny