- April 24, 2019
I have to point out before I say anything in this post, that the fact that McDonald's has Gluten Free options (Hamburger, Cheeseburger and Quarter Pounder) in Amsterdam is not the reason we decided on Amsterdam as this past Easter's holiday destination. Okay, so it wasn't the only reason... 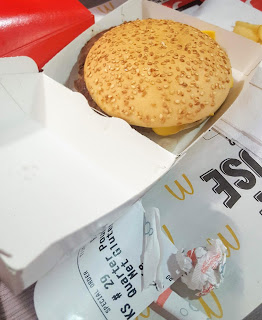 Flyfour has a hard time of it when we are out and about on our day trips, or on holiday as despite Coeliac Disease being something more and more people are becoming aware of not everywhere caters for people who have the disease. Sure, he could always pick up a salad (as long as it doesn't have hidden croutons or pasta in as a lot of them do) or eat ready-to-eat meats such as Chicken or Bacon, but sometimes it would be great to have something like a Mcdonald's, without having to ask for it without the bun, as the food looks terrible when deconstructed!


A few years back, either 2014 or 2015, when Flyfour was in Amsterdam he saw something that gave him immense joy. The Mcdonald's he was standing outside of had a Gluten Free symbol on the door and posters declaring "Lekker Glutenvrij", which means "Tasty Gluten Free"... so he went in and ordered and was so happy that he ended up sending a Whatsapp video to the family of him eating his burger, bun and all!

Of course, when we went we knew that at least one of our Meals would end up being a McDonald's, I mean if they are offering Gluten free buns and it's an easy option (and cheap for the whole family) then why wouldn't we! 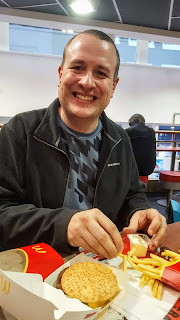 Actually twice, but it was so worth it because Flyfour got to eat a bun, Top Ender loved that there wasn't a six nugget meal, only a nine nugget meal (Three extra nuggets? Yes please!) and we got to eat Fritessaus, which as Flyfour promised is a little like Mayo but much nicer, and we got to try the Milkshakes, which were way sweeter than we are used to here in the UK.

So, what's the point of this blog post? Well, I guess if almost the whole of mainland Europe can manage to have Gluten Free Buns in their McDonald's restaurants, without the need to rework their kitchens to minimise/eliminate cross contamination, I don't see why McDonald's in the UK can't.

Then again, seeing as how we want to eat more Salad, I'm not sure I really mind.
Family Life Food Gluten Free Holiday Treat Night