The Kid The Police Were After!

- April 11, 2019
A few months back, Flyfour found a trailer for a film that we hadn't heard anything about. The film looked really great and Dan Jon, Top Ender, Flyfour and I all wanted to go and see it. The film was The Kid Who Would Be King, and by a strange coincidence, we were sent a backpack and hoodie for Dan Jon which bore the name of the film.

Dan Jon was planning to take the hoodie and backpack with us when we went to Amsterdam and so I asked if he'd mind if I took a picture or two in the garden. Dan Jon, of course, was up for that and started pretending that he was in a training montage, running around the patio and up and down the steps to the lawn. 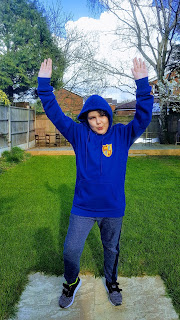 It was really funny, and we were both in fits of giggles over it all and were singing the Rocky Theme music. I was leaning against the wall of The Folly because I was giggling so hard and couldn't stand up straight. We were joking that the Police Helicopter we could hear above us were watching us, but didn't think much of it, after all, they were after some evil doers and we are good doers and they weren't really interested in a photo shoot going on in somebody's back garden.

After a few minutes though, we realised that the Helicopter was paying a little bit too much attention to the area our garden was in... And then we realised. 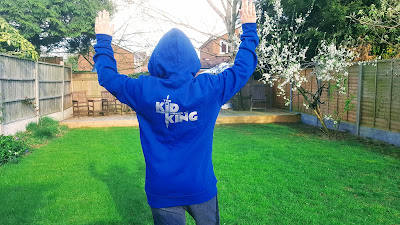 The way Dan Jon was running around our garden, the way he was jumping up on the lawn looked a little odd, like someone was placing someone under a citizens arrest, or that a criminal had realised he'd been caught and was quietly waiting to be taken into custody, especially as from where the Helicopter was, you couldn't see that there was a grown up taking photographs of the "suspect" because she was hidden by a wall!

I moved so that I wasn't hidden behind the Folly, so that the Helicopter and the police would be more easily able to see me and after a moment or two it moved on, hopefully after the real evil doers!

This, of course, started Dan Jon and I off even more with our giggles and now hope that our house hasn't been marked as somewhere to keep an eye on in the future because of the dodgy goings on!
Family Life Funny