Isn't That The Kid From The Movie?!

- April 12, 2019
The first night of our holiday to Amsterdam had us following Flyfour around, as he knew the city having been there four times before, me bringing up the rear, with the children holding hands and walking between us. We were all just drinking in the sights and sounds and trying to avoid the smells (honestly I didn't realise that the Cafe's were so pungent!). Everyone was being a little protective of Dan Jon, because he's the smallest out of all us and our baby and well we are all a little protective of him because of his Diabetes.

As we were approaching a crossing, I overheard part of a conversation between some teenagers who I had noticed had been following us for a while, or maybe just coincidentally taking the same route as us. 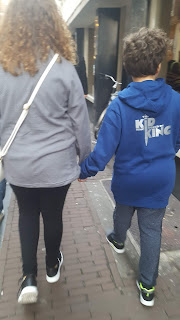 "Can you read it now, what does his jumper say?" said one of the teens and I realised they were following us and had been so that they could get a better look at Dan Jon's hoodie.
"The Kid Who Would Be King" said the other
"It has to be him!" said the first teen
"I'm getting the picture up on google!" said the other

I moved myself a little so that I could see what they were googling and sure enough, I could see stills from the movie "The Kid Who Would Be King" on their phone and was aware that they were looking at Dan Jon and trying to compare him to Louis Ashbourne Serkis, who plays Alex in the film.

I giggled as I watched them try to sneakily take a picture of Dan Jon, knowing that Dan Jon, of course, wasn't the star of the film and he wasn't the him that they were so certain it was. As we crossed the road we lost the two teens, but I quickly brought the rest of the family up to speed with what had happened, who all thought this was as hilarious as I did.

So, to the two teens who thought Dan Jon was a famous child, I'm sorry that I didn't tell you at the time, but it was just too funny and thanks for giving us such a good giggle.
Family Life Funny