- July 01, 2019
This morning, after a very early start according to the children, we waved Dan Jon off, on his week-long Year Six residential.
Top Ender was lucky enough to go on the very same trip four years ago, so we knew the drill. Of course, that didn't mean we were any more prepared for waving Dan Jon off and Flyfour, Top Ender and I all feel a small sense of loss, even though Dan Jon hasn't even been gone thirty minutes! It was the same when Top Ender went, one less in the house for a week feels like part of me has been cut off! 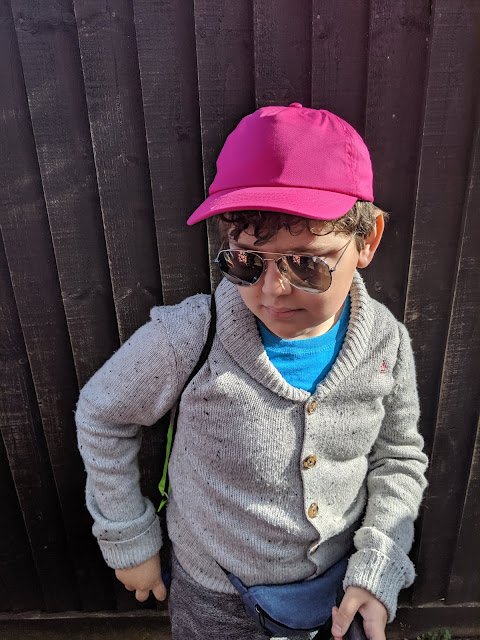 We were the first into the School hall to register Dan Jon as being present. We handed over his £20 pocket money, we handed over the medical form and a backpack full of Diabetic supplies to the Teacher in charge of medication.

"I'm sorry!" I said as I passed it over, knowing that compared to the other small boxes that would soon join the backpack, Dan Jon's supplies are huge. It's just we have to be prepared for every eventuality, and as he is so far away, it's not like I can just pop down and provide them with back up.

One of the teachers, who had taught Top Ender when she was at the School, joked that if one of the students didn't turn up this morning, Top Ender could have their space on the coach and how long would it take for her to pack a bag?!

Top Ender was ready to run home and pack a bag, just in case and I don't think I've ever seen Top Ender look so disappointed when she realised that all the children had arrived for the trip. Then again, she remembered she was getting to be an only child for a week, and that I'd be able to pick her up and drop her off almost anywhere she wanted, so she soon cheered up!

Dan Jon is going to have an amazing time, I know because Top Ender did and because I got to do almost the exact same trip, to the same destination and visiting all the same places when I was the same age too.

There's just one question I have that maybe you can answer for me. Is it time for him to come home yet?
Family Life Holiday School