Annie The Musical On Tour! #Review

- July 02, 2019
I was supposed to take Dan Jon to the Theatre last night. Out of all the shows that Milton Keynes Theatre had offered me (I get to go as Press, which makes me feel very lucky and means I get to write this review and not have to pay for the ticket, other than promising to provide a review) Annie was the one that I was sure Dan Jon would love. And then he reminded me that the night I was supposed to be taking him, he would be on his School residential, four hours away and there was no way he was going to be in two places at once, so I'd better take Top Ender.

Top Ender was thrilled to be going because as I have said at least twice in the last couple of weeks, she loves watching live Theatre and would probably sell me for parts to ensure she had enough money to go and see all the shows she would like to see. 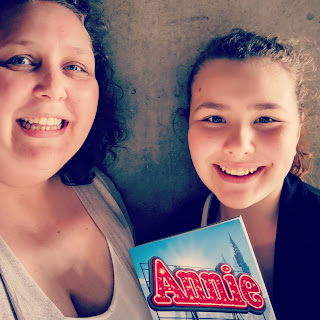 I grew up watching the film version of the musical, which from what I can work out from my memories of my childhood I watched it daily, but according to my Mum, it was more like hourly. Even now, I can recite it word for word and now that I'm older I kinda identify with Miss Hannigan a bit more than I probably should... 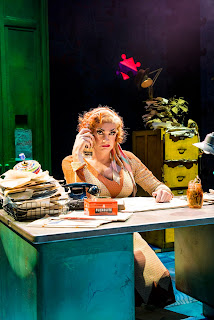 The revival of the stage show was something I was excited about. It was about time something as uplifting as Annie was made popular again and so I had high hopes about this touring version.

The energy of the cast is catching, from the opening screams of poor old Molly waking from her nightmare to the final rendition of "Tomorrow" by the entire ensemble, the audience is hooked and sitting on the edge of their seat as they want to see what happens next and who Annie will inspire.

The songs that everyone knows are performed with dance routines and despite a little lighting mix up at one point (a spotlight wasn't on a cast member but was quickly rectified and I doubt anyone else noticed) the staging of the show ensures no matter where you sit, you have a good view of the action. 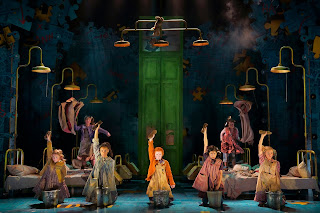 The musical is perfect family viewing, with Top Ender and I noticing a lot of children in the audience, including one of the Rainbows from the unit she volunteers and two Brownies from the unit we both volunteer at.

If the conversations going on around me were anything to go by, everyone was amazed at the talent of the girls playing the orphans and in particular, the young lady playing Annie, although I had a soft spot for Mr Warbucks (Alex Bourne) and Craig Revel Horwood really plays well as the ineffable Miss Hannigan.

Tops and I both agree that this musical is amazing and you need to go and see it as soon as you can. It's at Milton Keynes Theatre until this Saturday, so if you can book tickets then go!
Family Life Review Theatre Treat Night