- July 16, 2019
I'm not sure how I was first introduced to the musical Hair. I think I had picked up a song or two from my parents, and there was most definitely a song or two on some of my "Hits of the Musicals!" albums, but however it was, I knew that this was the one musical that I wanted to see... and not for the nudity, but because it was about standing up for your beliefs, about not being conventional, about the peace protests, about the freedom... everything teenagers probably will always be thinking about and fighting against their parents for.

Little did I know, I'd have to wait until I was 40 to see it at my local Theatre thanks to the great Press team, allowing Tops and I tickets! 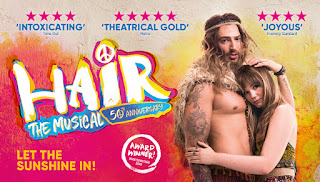 Standing in the foyer, Top Ender played the "Am I the youngest person here" game with me, which I thought was really odd. I didn't expect Top Ender to be the youngest person there, but from looking at the other patrons, she really was. We were trying to decide if this meant that I'm really liberal or a terrible parent, the answer of which was confirmed when we saw one of Top Ender's teachers and one of the teachers from Dan Jon's school (the latter whom I think is fabulous and would, if I could, force her to be one of my closest friends!).

I'm liberal and a terrible parent! 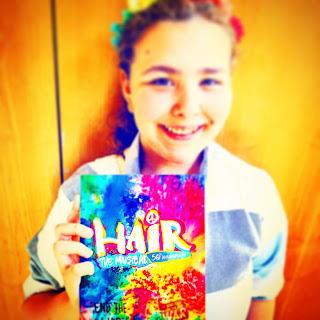 I've heard it said that the musical has lost some of its impact in the 50 years since it was first performed and I'd just like to point out that I believe that is utter tosh. Yes, we might not be fighting a war in Vietnam. Yes, we may talk more openly about sex and sexuality and not care if people are involved in interracial relationships BUT I don't think there will ever be a time where people are not needed to stand up and be counted because they disagree with the way things are being run, to point out the flaws and problems and stand up for what is right.

I had warned Tops that there were two things she needed to be prepared for. There would be nudity and there would be a point where audience members were asked to go up on stage. Two things which actually changed the face of Theatre back when this was written, and caused a new law to be written in the UK!

Look, I'm a theatre nerd okay, I know things like this!

I even made a £5 bet with Top Ender that the teacher who taught at Dan Jon's School would be one of the first on stage... and lost. Although she did later tell me she had wished she had gone up on stage, so I'm calling it a moral victory if not a profitable one. 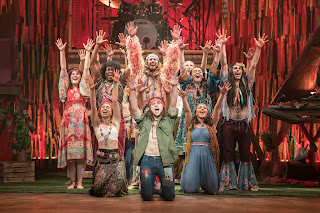 The show took a bit of time to get settled into its groove. The problem with middle-aged and older audiences is that they don't tend to like shouting out and having the fourth wall broken before they've had their interval drinks and ice-cream, but the cast persevered and with the removal or Berger's trousers to reveal a loincloth, the audience was suddenly a lot more open to the fun on stage.

Of course, the first act does end in all the cast members being fully nude on stage, having disrobed in front of us and it's quite emotional because of what it represents and because this was an actual move in the peace protests. Then again the ending of the second act with, well I don't want to spoil it but something terrible happens and if you're like me and engrossed in the story you may cry.

The show is at Milton Keynes Theatre until July 20th and will continue touring the UK over the Summer. If you are taking teenagers, then please be warned that there will be talk of sexuality, of drugs (and depictions of both using drugs and having sex) and of course there is full-frontal nudity of the full cast. It is, however, a great way to get talking to your teens about these subjects.
Family Life Review Theatre