Celebrating The 50th Anniversary Of The Moon Landing

- July 25, 2019
Flyfour and I are far too young to have watched the Moon Landing, seeing as how we wouldn't be born for another ten years, but it was an important moment for the world and so when the anniversary came round on July 20th, we decided that it would be great to do something to celebrate it. It was decided that we would watch the International Space Station fly overhead and see if we could see the soyuz spacecraft that was docking with it later that evening.

The children also thought it would be fun, so after donning jumpers, finding some blankets and some cushions they set up an area in the garden ready for us to sit or lay and just stare at the stars. 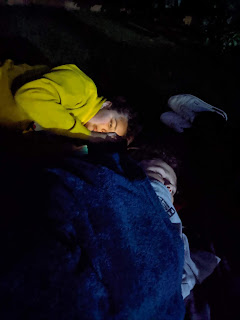 As we sat in the garden we watched the stars coming out and using an app on our phones we were able to work out what the various stars were, what constellations they were part of and also see where various planes were going as they flew over our garden. There was a lot of wildlife about, and not just our cats who seemed very confused about why we were sitting in their space in the dark. At one point I nearly got a bat to the face, so decided to lay down with the family instead of sitting up.

Eventually, we saw the Space Station go over our home. It was so fast and was so clear and really made us appreciate everyone just how marvellous the technology is that has enabled mankind to be in Space! 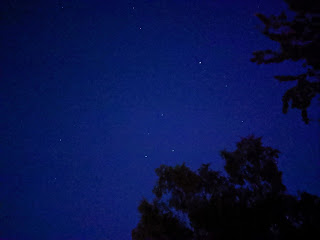 None of us wanted to go in after we had seen the International Space Station go over, so we decided to stay in the garden and watch the stars, listen to the music from a festival that was happening nearby and a rather excited neighbour who was playing some classic hits that we'd not heard in ages. Eventually, though, we settled down listening to music we loved, watching the stars and having jokes together (including one surreal moment where Top Ender ran around the garden to the Benny Hill theme tune music) and wondering if the neighbours were looking out at us and laughing at what we were doing, because it seemed that we had indeed gone crazy!

We promised each other that we would do this again over the summer, as we wanted to be able to just sit with each other, have fun and watch the stars come out. It's something I really can't wait to do again and again this year and every year to come.
Family Life Hobby Summer