They Make The Milk Turn... White?!

- July 04, 2019
Dan Jon has always been one who will eat just about anything. There are, of course, some things that he doesn't like to eat such as red meat and milk chocolate.

Yup, the kid can't be related to me.

To make matters worse, he calls milk chocolate, dark chocolate, which I keep telling him only evil people, those who are crazy and his Father eat, but whatever it is called the only chocolate he really likes is white chocolate. 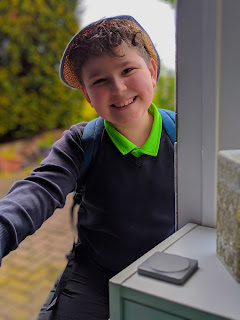 Which I also love, so maybe he is related to me.


A week or so ago, a tweet caught my eye where someone was talking about White Coco Pops. At this point, I hadn't heard anything about Kellogs bringing out a white chocolate version of this classic breakfast cereal and thought it was wishful thinking.

AND THEN I SAW SOME. 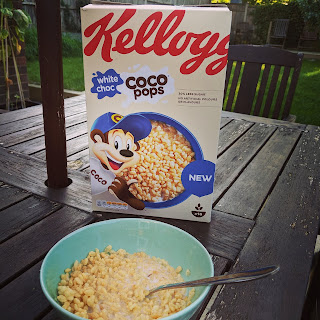 There were two options available to me at this point. Tell Dan Jon Jr or pretend that I'd never seen them. I took the option of telling Dan Jon and confirming that I would buy him some as soon as I saw some at a Supermarket.

Flyfour and I happened to see some on the Saturday evening before Dan Jon left for his residential and decided to give him them for breakfast on the Monday morning before he left, as a sort of bribe to get him to want to come home! 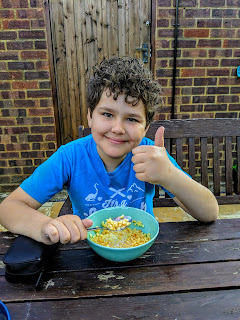 Dan Jon agreed that no matter what fun he had on the trip, he'd come home to eat the rest of his new favourite cereal.
Breakfast Family Life Food