My Boy is home!

- July 08, 2019
Dan Jon had an amazing time on his School residential, spending quality time with friends, enjoying the various sights and attractions of the Isle of Wight. He was very happy that they spent time at the beach every day and was able to dig a sandcastle city (that kept getting destroyed by the incoming tide each night) and he was able to enjoy his time away from the family thanks to fantastic staff helping him with his blood tests and carb counting and keeping his blood sugars in check in general.

I think it is such a rite of passage to go away without your parents. I did it, Top Ender did it, Flyfour did it and I'm so glad that Dan Jon was able to join his friends and enjoy his time... even if we all missed him terribly! 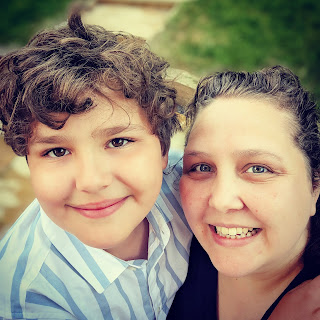 Dan Jon may have had fun, but he was glad that he was home because he missed us all too and to prove it he had gifts for us that he had really thoughtfully picked out (there were some for himself too) and he wanted to say thanks as his almost entirely new wardrobe had kept him nice and cool with the amazing warm weather they had, which I'm sure you can guess by the fact he has a slight tan now.

He was also super pleased that I refused to pack him jogging bottoms because he would have boiled!

We got the washing on that evening, but it wasn't until the Saturday afternoon as we were putting away the last few items of Dan Jon's belongings that we realised that something was missing.

I'm sure it will turn up eventually. I mean if it was left at the Hotel they will forward it on and the same if it fell out whilst he was on the coach back to Milton Keynes, even if one of his friends accidentally packed it, it will make it's way back to us because I very carefully named all of his clothing (yes even his socks and other pieces of underwear) so there is no doubt to whom it belongs.

You know what though, even if it doesn't turn up, I'm not sure I mind. In fact, he could have lost three pairs of shoes and I wouldn't have minded, because I have my boy home and I get to hug him every night again!

Now, if you'll excuse me, I'm off to give him another hug before he grows out of it!
Family Life Holiday School