- July 26, 2019
Right at the start of the Summer, Dan Jon went to a friends birthday party and was very excited. Not just because it was his friend's party, but because it was a Swim party.

Normally, with Dan Jon going swimming, I freak out a little bit. I'm never quite sure what Dan Jon's sugar levels are doing because I can't see if he is having a low or a high, or if he is rebounding or what is happening because unless we did a finger prick blood test every minute, we wouldn't get an accurate picture. 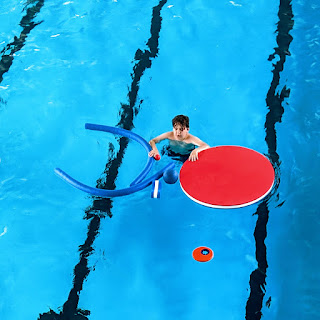 A couple of weeks ago, we got the Libre Flash Monitoring System and one of the HUGE things about it that mean Dan Jon wanted it was, it was waterproof and suitable to wear when swimming. And as the Libre takes a reading every minute, it would be great for me to monitor his sugar level to see if he was rebounding or was low or was going low or whatever it was that the swimming was throwing at us.

Dan Jon had a blast with his friends, swimming and just having fun.

I had stuck around, just in case Dan Jon had gone low or was needing the extra assistance of someone who knew about how to help him handle his Diabetes.

Looks like more swimming more regularly is back on the table!
Diabetes Family Life Health Hobby Weight And Fitness