- July 17, 2019
Ten years ago, Top Ender had her first Sports Day at her Primary School and every year until Dan Jon went to school, we trundled along to watch, cheer and take pictures so that in years to come we'd be able to remember the great fun that sports days are. Dan Jon joined the school four years later, and whilst the tradition of attending sports days continued, I no longer had my little pal to keep me company. Then four years ago, Top Ender left the School and it was a countdown until Dan Jon's last sports day... 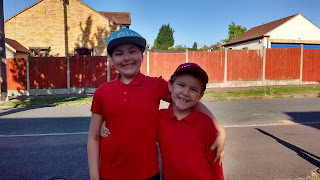 Sports Day is a great excuse to hang out with other parents whom you are thrown together with on the playground. You might not mean to be friends, but as we all know once your children have decided they are friends and you have baked in the sun together (I almost always remember to wear sunscreen) on the school field, half-heard a garbled message over a loudspeaker and admitted that you're not actually sure who that teacher over there is, you're friends for life.

My young at heart nature, meant that over the years, the school picnic, which was the way the lower School finished Sports Day, came to be a come and sit with Pippa and her family picnic. Various children who didn't have parents that were able to come and watch Sports Day, (or sometimes children whose parents did come but were made to move to be near me) have come to join me and my family for the picnic. Each of us with our own lunchboxes and of course, the years that I took ice-lollies were always the years where we had the most children sitting with us.

This week was the last Sports Day that I'll attend for Dan Jon or Top Ender. Standing on the field, watching the entire school run a relay race brought a little tear to my eye. Almost every single child that was running, I could say I've had a conversation with, or that I've seen work of theirs and given the gushing praise that they deserve for having worked so hard. Seeing Dan Jon sprint down the field, even though he hates sprinting, but he wanted to do the best for his team had me about to burst into tears.

It was sad, knowing that all this is coming to an end... but also a little liberating too.

No longer will I need to sit on the field, trying to work out if my child is in this particular race.

No longer will I need to encourage my children to try their hardest because participation is mandatory.

No longer will I need to try and work out if I can collect my child or if I'm going home after the picnic without them.

No longer will I get to see the children trying their hardest.

No longer will I get to cheer on their friends.

No longer will I get to celebrate.

I wonder if I can sneak in next year, even though my children will have left the school?!
Family Life School