An Afternoon With Johnny Depp

- December 01, 2011
I was sent the DVD On Stranger Tides and The Queen Anne's Revenge Lego set.

I took a break from Christmas films today to watch a film that adds the handsome factor to my life. I love men with long hair (which is why I married Daddy with his super short hair right?!) and so I'm a sucker for the Pirates of The Caribbean series starring the very lovely Johnny Depp with his equally very lovely long hair. 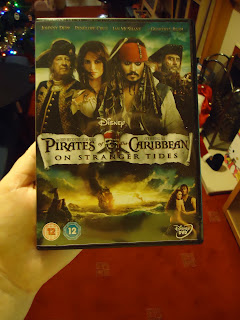 I spent most of the time watching Pirates of the Caribbean On Stranger Tides drooling and wondering what would happen if Johnny Depp dropped in to my house for a spot of lunch (I even put a bit of make up on just in case he did) and thinking how I could get him to stay forever, just hidden away from Daddy and the children and the next door but one neighbour who I know would steal him away if she got the chance!

I was supposed to team it up with building the Queen Anne's Revenge which Lego sent me a few days back, but it looks really complicated and I know that as soon as I built it that Big Boy will take it apart and it's heartbreaking for me when I have spent hours building a Lego set (it always takes me hours even if it is supposed to take minutes). 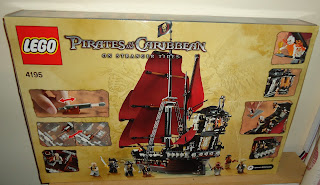 Maybe I should build a high shelf in my bedroom and then build the Lego ship to sit on it so that Big Boy can't break it into pieces after I have built it!
Toys