The UDraw for the Wii

In our house there is normally fighting over who gets to play what Wii game with who. I have become very proficient at racing games and games where I have to shoot the baddies cheered on by Big Boy who normally likes to play my side kick (ie I do all the work and he gets to pretend he helped win) and the strategy games that Top Ender enjoys are second nature these days. Over the last week there has been an eerie quiet from the children and instead of constant "Mum can you play on the Wii with me?" Top Ender and Big Boy have worked together playing on the UDraw. 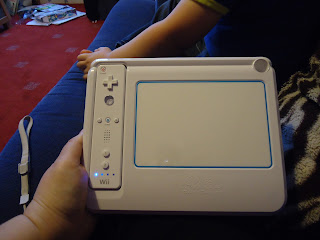 The uDraw is a game tablet that you insert your wii controller into (it can use the batteries then) and using a pressure sensitive stylus/pen (not seen in photo as it is attached on the back and fell out of the hole you see in the top right as I was taking the picture) you can control what happens on screen. The first game that we played was the UDraw studio Instant Artist, which came as part of the tablet bundle. Big Boy was very excited when it arrived and instantly started getting it out of the packaging, he worked out how to use it fairly quickly so I think I can safely say that it is easy to understand. I'm not professing to be a great artist, but my skills are considerably better using a real pen and paper than it has been using the UDraw, but it has been great to watch Big Boy play choosing what medium to work with and what colours to use.

(Video can be seen at http://youtu.be/8HyI4iIecGU)

I think that it is educational because Big Boy has been practising his drawing, motor skills, colour recognition, listening to instructions and it has been great for his confidence when the drawings he makes are completed and saved. I like that on the Wii you have the option to save the creations to an SD Card and so these drawings of BB's have been stored for later use, I'm not sure what use but maybe I will turn them into wrapping paper next Christmas!

The UDraw for the Wii has an RRP of £69.99 and there is a version out for the Xbox which has an RRP £79.99 as does the version for the PS3. As I mentioned this comes as a bundle with the Instant Artist but to get the full enjoyment out of it I think you would have to invest in some other games. We were also sent Pictionary, Disney Princess Enchanting Storybooks and Penguins of Madagascar to play on the UDraw but I will review those separately over Christmas and New Year because I haven't told the rest of the family where I have hidden them! 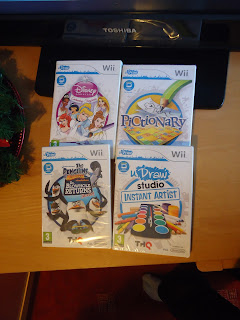