A Family Fun Night Out at Panto

- December 13, 2011
We were given a family ticket to go to the Panto at Milton Keynes Theatre.

One of my favourite family Christmas traditions is going to the Panto. When I was younger the company my Dad worked for would take a coach to the nearest local panto. The coach would be full of employees and their families and it was just a lot of fun. I'm pleased that this tradition is something that Daddy and I have been able to keep going with our family and last night found us at Milton Keynes Theatre ready to watch Aladdin, which is this years panto. At least I didn't turn up a week early... 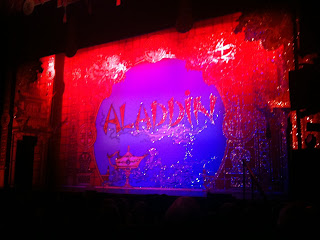 This year in the Milton Keynes panto we have Gareth Gates (Yes, Gareth Gates) as Aladdin, Paul Burling (Yes, him from Britain's got Talent) as Aladdin's brother Wishee Washee and Nicola Brazil as Princess Jasmine along with the Genie of the lamp being played by either Russell Grant, Anita Dobson or Camilla Dallerup depending on when you go. Gareth Gates has an amazing voice and whilst I have never really seen his sex appeal seeing him topless at one point was a rather nice Christmas treat! Paul Burling was as funny as I remembered him from on TV and slipped seamlessly into impressions which had Top Ender and Big Boy giggling manically as they recognised cartoon characters and people from TV shows.

The whole cast was great and worked well together and Adam Pearce who played the evil Abanazar was fantastic, the level of boos and hisses that he got was brilliant recognition for a role well played and he gave as good as he got with his disses to the audience and his performance during his solo song where he gave a full on rock scream deserved more applause than it got, but it is Panto and he was the baddie and so most of the audience booed their appreciation. Abanazar was easily my favourite character and I may have started stalking him on Twitter... 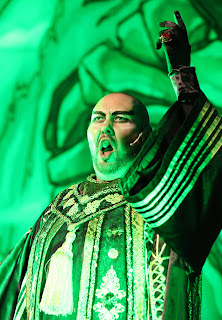 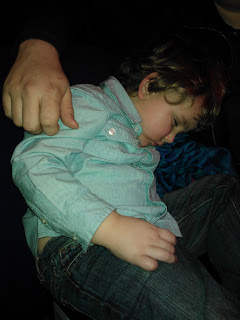 Top Ender was almost beside herself with excitement when asked if she would like to go up on stage towards the end of the show to help stock Aladdin's farm with animals. Tops and three other children from the audience had the rest of the audience in stitches in the way that innocent young children do when answering simple questions. Paul Burling skilfully handled the youngsters on stage with equal amounts of support and gentle teasing and has finally convinced Top Ender that she does sound a bit posh at times.

I don't think there is anything quite like a Christmas Panto and as the children, Daddy and I spent the journey home repeating lines and singing songs from the Panto I would have to say that this was a really great family night out and if you find yourself in the Milton Keynes area before the 15th January 2012 then book tickets to see Aladdin and enjoy a bit of family fun!
Review