- December 08, 2011
We were sent the Tumblekins Fire Engine and Fire Station to review. 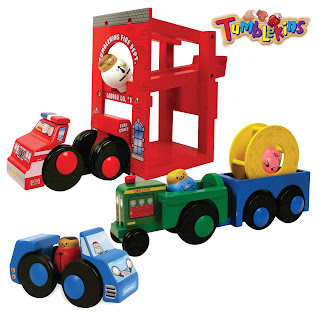 Big Boy has been cracking up with laughter over the Tumblekins Fire Engine and Station. You start the little figure off at the top of the Fire Station and then much like me when walking in the snow he tumbles head over heels until he lands in the Fire Engine which is then driven off to Big Boy's imagined emergency. Big Boy loves getting the man to land so that when the wheels move along the little man ends up rolling around in the back of the Fire Engine too.

I do love the squeals of delight that we get from Big Boy when he pushes the man down the Fire Station ramp and  the occasional times when he spins round the wrong way and gets stuck in the ramp just adds to the fun of the toy. I have looked online for more of the series as I have found Top Ender playing when she thinks we aren't looking and as I found Big Boy standing on the Firestation earlier today and it hasn't broken under his weight I'm going to have to say that they are really well made and so a good investment.
Toys