- December 29, 2011
I've already talked about having fun doing some hoovering tasks such as cleaning the stairs, (which in our house we do whilst pretending to be Mountain climbers), but hoovering in general is something that we love to make fun in our house and as it is something that we have to do as part of cleaning other rooms, such as when we clean our bedrooms, we know that this one chore has to be really good fun. There are two ways that we try to have fun when we are hoovering and the first is a game that my Mum used to play, but I'm sure has caused untold psychological damage to all the children she ever played this game with...

The game is Hoover Chase.

The idea is simple, whilst hoovering the floor you simple tell all children to "tease" the hoover by jumping in front of it and having to jump back out of the way before the hoover sucks them up. You can remain safe by staying on the sofa, dinning table, toy chest or anything else that the hoover can't climb up (it's like a Darlek in that respect!) and it is often accompanied by children's shrieks as they quickly rescue toys, rugs or shoes that have been left on the floor whilst they jump back on to the sofa. 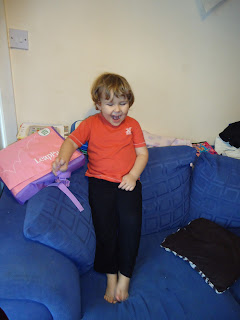 The second game is something that Top Ender and I found quite by accident, but decided it was so fun we should carry it on and we adapted it slightly. I used to play silly games with Top Ender like hiding dried peas in the living room for her to find as a counting game. The problem with this game was I would quite often forget how many dried peas I had hidden and worst I forgot where I had hidden the dried peas!

We turned it into a hoovering game, we had to hoover everywhere, under the sofa under the book shelf, around the back of the TV unit basically everywhere that we could hoover we would. It's a fun way to do a deep clean of a room and now whilst we might not also be hunting for dried peas (that's the adaptation!) it is fun to find as many places as possible to fit a hoover nozzle!

The idea of making chores fun is that children will be able to learn skills that they will use in the future. I mean one day they are going to have their own home (at the moment I don't want them too, but I'm sure in the future I will really want them to!) and they are going to need to know how to run their house, how to keep it clean, how to feed themselves healthy and tasty food, how to do basic DIY and how to manage their time so that they have the time to sit on a computer and blog or tweet or facebook and still have clean clothes, good food and a clean and tidy home. I might relax a little knowing that.
Chores