- December 05, 2011
Recently Top Ender and Big Boy were sent some dolls from the Sylvanian Families Collection to have a play with. They were sent The Celebration Wedding Set featuring Katherine and William Balmoral and the iconic Motorcycle and sidecar. I thought that it was going to be a case of Top Ender wanting to play with the Wedding set and Big Boy favouring the Motorcycle and Sidecar, but nothing ever works out like you think does it!

Top Ender and Big Boy loved The Celebration Wedding Set. They remembered earlier this year when The Royal wedding took place, and we all dressed up to be part of the fun and this toy set allows both children to act out weddings as they think they should happen with plenty of last minute objections from jilted lovers and people who think that the couple should marry them instead of each other. It's been great fun and has allowed both Children to let their imaginations take the lead.

The Motorcycle and sidecar have been used for almost everything since it arrived, with the maps and driving licenses being carefully folded and placed in the storage areas and even doubling up as the mode of transport for the wedding party to and from the church. I must admit though I was a bit worried when I found that they were also using the motorcycle and sidecar as a get away for a bank robbery... 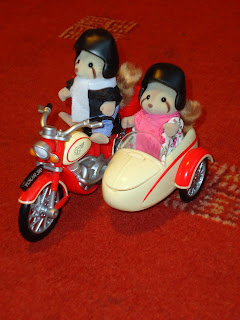 The toys are great fun, good value and well made. Top Ender has found that several of her classmates have Sylvanian families on their Christmas lists and there is even a bit of a grown up market if the after school Mums are anything to go by with one Mum actually looking at buying herself a Sylvanian House for Christmas...

The Wedding Celebration costs £24.99 (RRP) and the Motorcycle and Sidecar costs £26.99 ( RRP) and I think that this is well priced for toys that everyone loves to play with.
Toys