Brave - A Review Of The New Disney Pixar Film 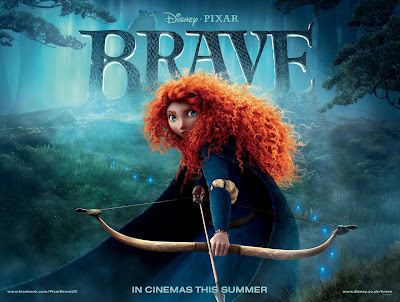 Several weeks back we went to see Brave at a special Disney preview screening. I was so excited because I am very proud of my Scottish heritage and I knew that Brave was the story of a Scottish Princess, Top Ender and Daddy were also excited and Big Boy was less excited but was still eager to go because of the promise of popcorn and sweets during the film! We enjoyed some fun in the foyer, with Top Ender getting a traditional Scottish headdress made from balloons and Big Boy got a sword bigger than he is! 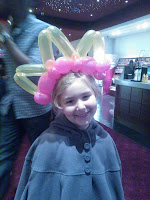 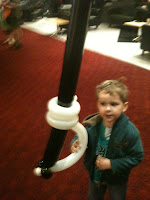 The film started with a few trailers for films that I can't wait to come out, I was disappointed though that there wasn't a trailer for Monsters Inc 2. I'm considering going on holiday to the USA to see that film as soon as it is released! There was a fantastic Pixar short called La Luna before the film started and it was so beautiful, I wish I had a finger nail full of the talent that the guys behind that short had.

The storyline for the film is that which every family can understand, the once close relationship of mother and daughter has waned a little. The daughter thinks the mother doesn't understand her and is too controlling and the mother thinks that the daughter is being stubborn and wilful just to spite her. I remember my own teenage years as being pretty much like this, although without the 10th Century Scottish backdrop and I'm hoping that Top Ender's teenage years will be minus the backdrop and the fraught relationship too! Of course during the film they both come to understand each other more and see just what it looks like from the others point of view, this is a Disney film after all.

The film is breathtakingly beautiful, the animation as always is flawless and despite a few bits where my eyes were strangely wet from allergies it is a really funny and upbeat film and the sort of thing that I could watch again and again. All my family agreed with me and Big Boy who hadn't really been that excited about the film had sat transfixed the whole 93 minutes it was on. We were very proud because it's one of the first films he's actually sat and watched without wanting to get off his seat to play something on the floor.

The film is a PG as there are a few scary bits in it (I jumped at a couple of them, Big Boy who is four didn't so much as blink at them) and therefore if you have young or sensitive children you need to think twice about taking them to see this. A PG should be suitable for children aged eight and over and those of a sensitive nature and under eight might not find this is the film for them until it is released on Disney DVD as then they can watch it from the comfort of their own living room.

We are eagerly waiting for the film to be released on the 13th August in England and 3rd August in Scotland.

We were given four tickets to a preview screening.
Review