How Did We Know?

- August 16, 2012
I keep being asked how I knew that there was something wrong with Big Boy and it's taken me a while to write it down because at first it seemed like I just knew, it was my natural Mother's instinct but it wasn't. There were a lot of signs and it was only because of my own upbringing that I knew one of these signs added up to something else and looking back now there were plenty more signals that we should have noticed.

So first a little background. I never really thought of Diabetes as being something bad to have. My Mum had Type 1 Diabetes since before I can remember and as far as I could tell she had what she wanted to eat when she wanted and even the boy in my class who had Type 1 was fine and only once I saw him get to eat a small snack sized chocolate bar whilst everyone else got changed after PE. My Mum got my sister and I to learn how to give her injections and we were often given finger prick blood tests because we were curious about what my Mum was doing but that was about it. I mean sure we knew that a part of my Mum didn't work and that she wasn't allowed to eat sugar but that was about it. As I grew older, apart from the occasional "Did you remember your injection" comment when we were going out to eat or my Mum was coming round my house for a meal I didn't think about it.

And now forward in time from then, but back to a couple of months before Big Boy was diagnosed.

So Big Boy was (and is) a perfectly normal not long ago turned Four year old. He loved sweets and doughnuts, he loved to run about and had been potty trained for quite a while. Just like me Big Boy loved to drink juice and water and we would both always have a bottle of water on the go. Like most growing boys he was also always hungry. 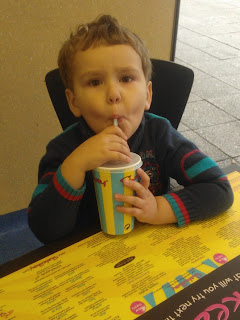 A typical day would see him having a Brioche, then Porridge, then a slice of toast, then some fruit and then lunch and more fruit maybe a packet of crisps, an after school snack followed by dinner, sometimes some pudding and then if he was still hungry maybe a little supper. We thought that maybe it was in relation to a growth spurt, just like Top Ender had at the same age and Big Boy was changing shape, losing the chubbiness of Toddler-hood and becoming all tall and lean like a Schoolboy.

Then he started wetting the bed. We figured it was because Big Boy was drinking too much too late in the day and so we reduced the amount he drank. We had tears and arguments because he would claim he was still really thirsty despite having drunk all that we had allocated and even with wake ups during the night we were having to change the bed sheets several times a night.

BB was also turning into a teenager, a little early granted, but the moods he got were terrible and just like the ones I had as a teenager. He would often flounce off upstairs muttering to himself about how unfair either Daddy or I was and after calming down would come back to us, apologise and everything would be okay again. Or then there were the times where he would get overly emotional and everything and anything could reduce him to tears.

We had also turned the corner with early mornings. Daddy and I remembered before Big Boy was born Top Ender had started sleeping later in the mornings and we were really looking forward to when Big Boy would too and finally right around his birthday it happened. How we loved those late mornings, we'd been waiting four years for them to happen again! 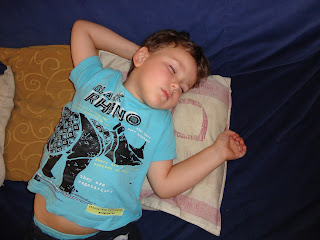 The constant drinking of juice and water, was his body trying to flush out the sugar build up in his system. The constant eating was because his body was trying to get the energy it needed and couldn't process.
The weight loss was actually muscle loss as his body broke them down to get energy
The bed wetting was his body getting rid of the sugar in his system.
The bad moods and high running emotions were because of the high blood sugars he was experiencing.
The late mornings were because he had no energy.

I had taken Big Boy to the Doctors the first time (with a urine sample) because I thought he might have a bladder infection and that was why he was wetting the bed. The Doctor did a dip test and found his sugars to be excessively high and sent us to the hospital for further testing, however a couple of hours later and his sugars were normal so we were sent home.

The second time Daddy took a urine sample in to the Doctors have a dipstick test because there had been a smell of sweetness about BB when he had been to the toilet. This was the only sign I picked up on, the smell of ketones in Urine is one I remember from my childhood and I knew it was wrong. I didn't want to take BB to the Doctors though, because I didn't want to believe it.

We were lucky. We caught BB's diabetes before he started suffering from Diabetic Ketoacidosis. If we hadn't realised that the sweet smelling urine was a sign we might have just carried on as before until BB's body couldn't take it any more and he ended up in a coma. It's unusual to die from Diabetic Ketoacidosis, but it does happen because the onset is so quick and it's something that Big Boy will always have to be wary of.

So there you have it. We found out that Big Boy was a diabetic because of the smell of his urine, but there were other signs there that we missed. I hope that by you reading this blog post it will mean that another family will be aware of the signs and that if needs be they can take action as quickly as we did.