- August 24, 2012
Earlier this week, Big Boy, Top Ender and I headed off to London to meet up with some other Bloggers and the team at Smart Shoppers at a farm in Hackney. I didn't get a chance to look round the farm, the children have assured me that there were all the usual animals you'd expect apart from Cows, but we see enough cows here in Milton Keynes so they didn't mind! We took the train down, which was great fun as the children love going on the train and they got plenty of admiring looks carrying around the Smart Shoppers Heart Pinboard! 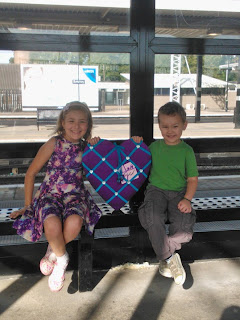 At the farm whilst the children were busy painting and being crafty us Mums got to have a master class in making Home Made Body Scrubs, Bath Sachets and Face Masks. It was really lovely as I often see tutorials online about making your own at home things, but as far as I could tell you had to buy the "finest" ingredients from various places and it could cost a fortune but this was about using what you could easily buy at the Supermarket. The afternoon was spent discussing ways that we all save money and have fun and generally do the things that we all do and aren't ashamed to say so. There were a lot of ideas bandied about and I felt quite out of place as I think instead of being Thrifty I'm just tight...

It was also the first time that people who know BB (outside of family) had seen him since he had been diagnosed as being a Diabetic. The lovely Jen could see straight away that he has lost weight, (which was one of the hardest things for us to notice as we are with him everyday) but like she and Cass said they can see that we are adapting and it hasn't changed our dynamic as a family. That was good to hear, it made me relax and it became just an ordinary day out for an ordinary family. It seems so silly now but I was panicking a bit before we went, because if anything went wrong it was just me that was on hand to deal with it.

As I said though it was just a normal day, nothing went wrong. Jen's boys treated BB just like they always do, BB ran around with them and Tops and Cass's children and there wasn't anything that would have marked BB as being anything other than a four year old boy who likes playing with his DS, making a mess and eating Pizza.

BB was just a normal boy.

BB is just a normal boy.

It's put me in a much better place (mentally) about BB going to School because I realised that I'm the one that's thinking of BB as being something other than a normal boy. So he has me and his Dad for a Pancreas instead of an organ inside of his body it hasn't stopped him being anything other than my son and I needed my friends to remind me of that.

Our day out and our travel was paid for by Smart Shoppers and they sent us a few bits before we went down too.