- August 27, 2012
Once, in a moment of desperation, I started telling Big Boy and Top Ender a story about how they were descended from Pirates. Actually, what I said was that they are descended from several of the most powerful Pirates in history; Which means that the Bad Pirates want to get them to come over to the bad side of piracy and that since they have been born the bad pirates have tried to kidnap them to teach them the evil ways of the sea.

The story kept them quiet for absolutely ages, as they listened to the tale unfold and they heard about the various ways in which the Bad Pirates tried to kidnap them, or the Good Pirates rescued them or the silly scenarios that I came up with (Pirates for example love Tomato Soup). Little did I know that this simple story to keep the fractious children calm and quiet was going to become a very popular story in our house.

The problem when something becomes popular is that other things have to revolve around it. So when the children are digging in the sand at the beach, they aren't trying to go to China as I used to; No, they are trying to find Pirate Treasure. When they make maps, they aren't mapping the best route to the park or local shop as my sister and I did; No, they are making Pirate Treasure Maps. Apparently, it's in their blood.

So, we love Pirates and Yellow Moon sent us some of their favourite Pirate crafts items to have some fun with. The first thing we saw were Make your own Pirate Masks. We loved them and Tops, BB and I all sat together making them one afternoon and spent the rest of the day wearing them. Daddy got a bit of a fright when he walked in the house that evening! 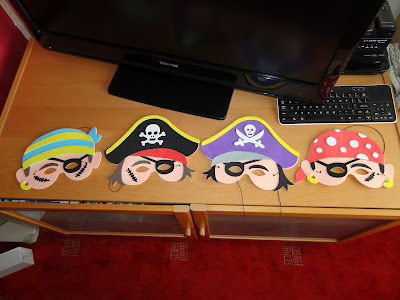 The masks were really simple to put together, with BB and Tops making their own (in the middle, Tops was responsible for the purple one) and helping me to make the ones for Daddy and I. We did have to add a little glue to a few places the next day as parts were peeling off in places, but they were very easy to fix and it was more preventive than anything else.

Tops and BB continued their crafting by colouring in some treasure chests using the Giotto Turbo Colour pens. My Mum said that they kept quiet for ages whilst colouring the Treasure Chests in (she was babysitting the following evening) and I loved what they did so I had to make one myself. I got to use the Giotto Metallic Decor Pens though as the children hadn't noticed these when they got crafty! 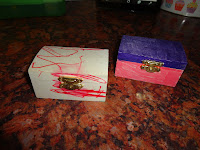 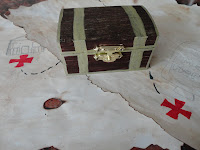 As you can see we also made some Treasure maps (my chest is sitting on them), but that's another blog post as we took video on our expeditions which will crack you up!

The last two crafts that we got were Pirate Finger Puppets and some Pirate Foam Stickers and Coloured Card. We made a back drop out of the stickers and card for our finger puppets and made a little puppet show. I was going to put up the video that we made, but it hasn't come out very well. Hopefully we can perform it again when Daddy is around and he can film it for us rather than us hoping Big Boy can manage! 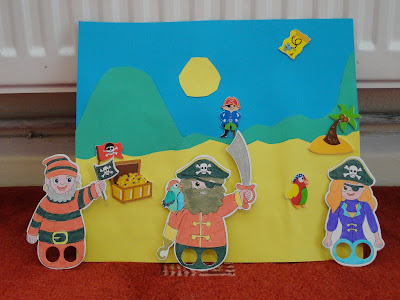 The Pirate crafts went down a storm in our house, and we have some more fun pirate ideas planned for later this week!

We were sent crafts items by Yellow Moon.