- August 18, 2012
Despite having a calendar and being told several times in advance it was only when I was reminded on Thursday morning that Daddy wasn't going to be here on Thursday night last week that I actually realised that the one dinner he had asked for he wasn't getting. Still I'm sure he didn't mind too much as he ended up having a Take Away at work and Tops and BB enjoyed some Fish Fingers, Sweetcorn and Chips! I've triple checked over dinner plans for this week, but as far as I can see everything is as planned...


I made Fish Cakes out of Red Salmon, Tuna and a load of vegetables so I think that dinner tonight will be very healthy and quick to make! As I'm out all day, it's perfect for Daddy to make as all he has to do is throw it all in the oven and he can carry on having lots of fun with the children, playing on the Wii and possibly stalking my Twitter Stream to find out what I am up to.


Having the Roast Chicken back last Sunday was PERFECT. The roast was lovely and I always think it tastes better after not having had Chicken for a few weeks. We're back on to Chicken again though and this week I'm serving it with Home Made Gravy, Home Grown Potatoes, Some Veg and Stuffing as normal. I'm going to put a little Rosemary in with the Chicken and a tiny bit of Lemon too.

I can't believe I haven't made this since January when I found it in my new Slow Cooker cook book! I'm going to make it with rice instead of noodles as I'm starting to miss egg noodles and I don't think it's fair for Daddy not to have them when everyone else does. That is of course unless I can somehow find some Thick Rice Noodles or Flat Rice Noodles before Monday. 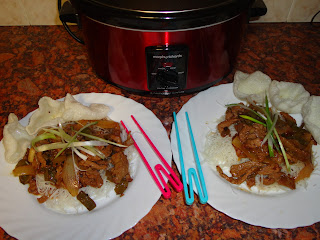 
Morrisons released some research that over the Summer Holidays parents will go into debt and to combat that they came up with some ideas for low cost activities, meals and put it all together on their Savers Summer website. Anyway they challenged me to come up with a meal using their savers range or I could use recipe cards (like I did when we had the Pork Chops with Roasted Pears) but I've decided to make something... I just don't know what yet! I'm going to take a look around the store and work out what to buy that suits all our dietary requirements!


I think this is one of the best meals, everyone loves sausages and mash (well actually Top Ender isn't keen on mash, but you know everyone else likes mash) and served with onion gravy just makes it seem a little more grown up and sophisticated. I could serve it with beans if we didn't mind the gravy and bean juice mixing, or with peas but I'm going to serve it with Cabbage! I'm going to mash some parsnips in to the mash for extra flavour and add some chives for a bit of colour too.


You know when you are looking through pinterest and you see a recipe and you pin it thinking, this would make a great meal and then you go back a few weeks later and can't find it? Well that's what I did for this meal. The idea is to cook pasta (like penne) and layer it in a dish before adding a layer of tomato and then a layer of mince and top with white sauce and cheese. It makes a pasta bake/lasagne that looks fab and I think that my lasagne loving family will love it.


We used to eat Sweet and Sour Chicken fairly often, it was one of Daddy's favourite meals and I often think it's a good Friday night meal because it's so simple to cook. I used to use jars to make the sauce, but it's so simple to make a Sweet and Sour Sauce and I want to try and reduce the sugar in the meal so I'm making my own. I use cornflour, pineapple juice, garlic cloves, ginger, dark soy sauce, white wine vinegar, brown sugar, tomato ketchup, dried chilli flakes and freshly ground black pepper. I'll add some chunks of pineapple, some small pieces of peppers and some onion too to increase the amount of fruit and veggies in the meal!

So are you planning anything similar this week or do you hold the secret to making the perfect roast? Let me know in the comments!