- July 10, 2015
I think everyone I know has been to Jamie's Italian, and has talked about how fabulous it is. There was a full conversation a couple of weeks ago between two of my friends on the best place to sit in the local restaurant (booths are best for the family and for those who like a comfy seat), another friend had me drooling over some mushrooms that they described in the most amazing detail and despite them having gluten free pasta the closest we had been had been looking at the menu outside of the store and declaring that we'd like to give it a try. 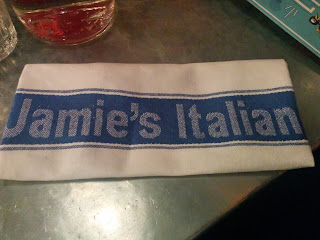 And then we were asked if we'd like to go to carry out a review and you know my family motto, Veni, vidi, edi, (it isn't really it just fitted well lol) so we were booked in and I spent the next week drooling over the menu and what we all might order.

So. The first declaration of the post is that the staff knew we were doing a review. They had a table ready for us, all set up and the Manager of the restaurant took us to our table, introduced our server and was generally really nice. I don't think this is normal behaviour (well, the being nice bit is, the OTT aspect of it isn't) as a hostess who was standing at the door looked a little confused over the manager taking us to our table when it was her job.

Daddy said the Steak was nice, although he didn't offer me any to confirm this and despite it having been marinated he didn't think the Steak was any more flavoursome than some of the steak we have at home, but it did cut really nicely. 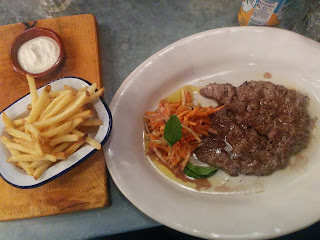 I ordered a special, it was Salmon and Pasta, I've forgotten the exact name but it was nice although personally I would have added a lot more pepper, garlic and chilli to the dish as it seemed a little under seasoned, but that could just be because my Mum has ruined me with my love of cracked pepper all over my Salads, Soups and well, basically every meal I eat other than cereal! 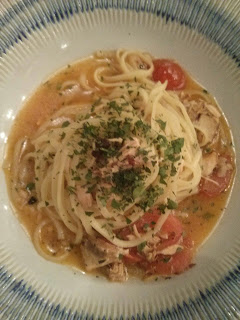 Big Boy and Top Ender were both given the Children's menu to pick from and they got to look at pictures of the food through a Viewmaster type toy. I have to say it was a brilliant touch, and the Children loved it especially Big Boy who was rather taken with the viewmaster after having seen one in the opening scenes of Jurassic World a few weekends ago. Big Boy also loved the pack which he and Tops were given (one each) as the colouring and other little things they had to play with were fun additions to the evening. 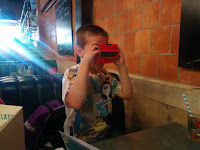 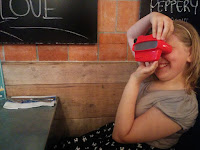 Big Boy loved all the meal options, but decided to go with his classic Meatballs and Pasta. His sauce seemed a little sweet to my tastes but judging from the speed BB wolfed it down he approved! 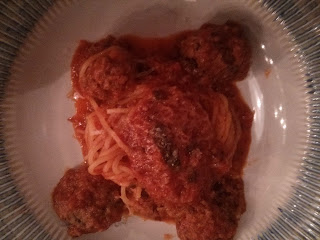 He didn't approve however of the Salad, which Tops and I split... actually thinking on it I just realised that Top Ender willing ate a salad. I'll have to give her a sticker for that!

Now, it's become a joke in our family that Top Ender has hollow legs. Why? Well, the child could eat for England should competitive eating ever become a thing over here. Well, more of a thing. Anyway, nothing on the children's menu made her think that's what I want and so she took a look at the main menu and discovered that what she wanted was the Sausage Pappardelle with a side of Funky Chips. 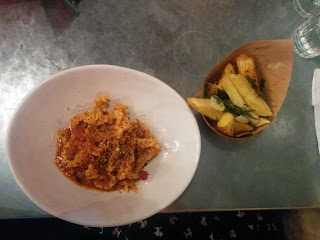 Clever Daddy noticed there were two prices on the menu and our lovely server confirmed that the small portion would be about the same size as the larger Children portion so Tops had that and enjoyed it. So much so that when I asked if I could have a small piece she nearly cut my fingers off!

The Children decided to have a pudding, Top Ender who has a thing for Brownies with Popcorn (is that the "in" dish this year? It seems to be on every menu I've read recently) and Big Boy went for Chocolate Ice Cream after a near melt down over the fact that the restaurant had run out of almost every other flavour but that is to be expected given the hot weather we had been experiencing (and hopefully still are!). 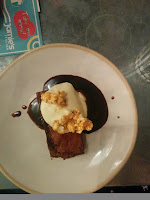 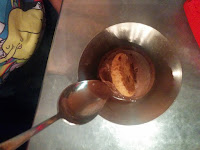 Would I go again?

Absolutely. It was a nice meal and it was good value (The whole meal came to just under £55). The fact that they had gluten free options is a BIG plus for us as a family, as is the smaller adult meal sizes (thanks to Top Ender being a mini adult) and the atmosphere is the sort of friendly place you'd want to go if you wanted cheering up.

And just to prove it, here's our lovely server who kept us entertained and gave me permission to post this photo on the internet! 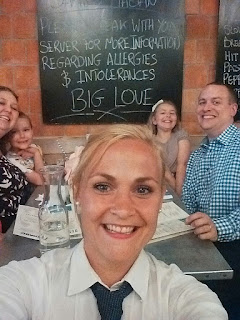 We received a discount off our meal, which was nice but not as nice as our server.
Food Restaurant Review