- July 22, 2015
The one thing that I KNEW I wanted to do for the start of this Summer, was the crepe paper streamers over the front door again. The Children and I loved this last year, and it's just one of those things that's going to be a tradition until the Children are too old for it. I figure that'll be a lot sooner than I think, but for now it's a tradition!

Big Boy did give me one piece of advice. He said to me "Please make sure there are more streamers than there was last year". And it's true last year it was a bit sparse, but I think that's because I didn't plan that far ahead!

I may have gone a little overboard this year. 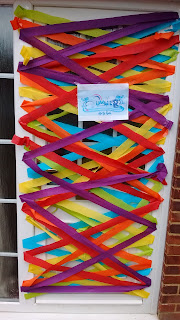 The children were so kind, after they had burst through the door, they told me to have a go, bursting through the top part of the doorway, which they had been too short to reach. Top Ender offered to film me doing it, but I filmed me running through the streamers. It's so much fun!


So Summer has started officially in the A Mother's Ramblings house. What are you up to this summer? We need some ideas of fun things to do!
Family Life Summer