- May 24, 2017
Flyfour and I like to tease each other about our love for Musicals. Whilst my knowledge is a little more encyclopedic than his, he isn't really that far behind me, especially seeing as how we both seem to listen to Encore Radio day and night (Flyfour has programmed me up a sleep timer so I can listen to the DAB radio whilst going to sleep because he is the best husband ever!) and do a mean duet with I know him so well and anything from Blood Brothers being our favourite to croon to!

Anyway, we like to tease others about what musicals we have and haven't seen and one Musical that Flyfour knows the music to but has never seen, not even the film version, was Evita. I have seen the film version at least a zillion times and was lucky enough to see a touring version of Evita back in 2013, so when I asked Flyfour if he wanted to go this time I wasn't surprised when he said yes VERY quickly. 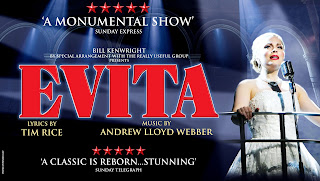 Flyfour took Top Ender with him, not only has she inherited our love of live Theatre and Musicals, but she is a lot of fun and it's nice to have one on one time with her doing "grown up" things when we can. The rest of this review, is over to Flyfour. 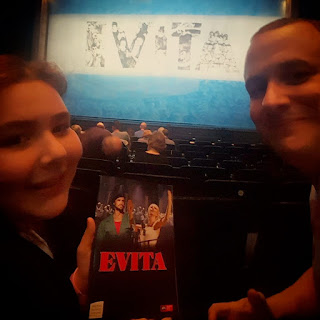 As Pippa has said, I took Top Ender with me to see Evita, and despite knowing almost all the songs in the musical and the rough story outline (thanks to Pippa filling me in) I had never seen the show and neither had Top Ender.

I didn't realise that Evita is a sort of anti hero in the show, her downfall comes about at her own hand (well not her death, that was a tragic illness) because she tried to sleep her way to the top and reached too far in wanting to be the Vice President of Argentina.

Uh oh, I think I'm in trouble as Pippa is shaking her head...

Okay, so Pippa vehemently disagrees with me as she sees Eva Peron as a hero, yes she may have been portrayed as a mistress in the musical, but Pippa claims that this may have been a made up fact and doesn't a woman who came from nothing yet became regarded as a Saint to those around her allow for a little misstep here and there?! Doesn't a woman who was in control of a country in the 1950's deserve some respect?

Well, I don't think I can answer that without sleeping on the sofa, so I'll just leave that conversation for another time. 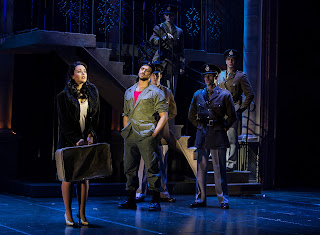 I love that this is more of an Opera than a Musical, because every line is sung which reminds me of another of my favourite Lloyd Webber musicals, Aspects of Love.

With the simple set design, you really are focused on the music, which you should be, although at times I thought that it was a little understated. I am so used to hearing powerful renditions of the songs that when you hear them a little less forcibly sung, it seems wrong however it did add more depth to the characters and I'm not sure that I expected some of the songs to be sung by characters that sung them... 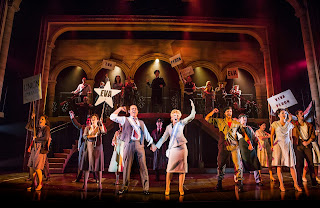 The cast were brilliant, their performances were well received on the night with plenty giving a standing ovation for those who they loves, especially the young girl who sang in the second act where the audience seemed to explode in applause for her and rightly so, her voice was brilliant! I just wish I knew her name so I could credit her accordingly.

If you can make it to Milton Keynes Theatre, Evita will be on until May 27th with tickets starting from £15, but don't forget to let us know in the comments what your favourite song from Evita is!