- May 31, 2017
As Monday was a Bank Holiday, we had the pleasure of Flyfour being at home. Yes, I know he was at home on Friday (technically he was working from home) and on Saturday (The children and I were at a Baptism in the afternoon) and on Sunday (The children and I were at Church in the afternoon) but having him at home doing nothing was different to the previous few days! 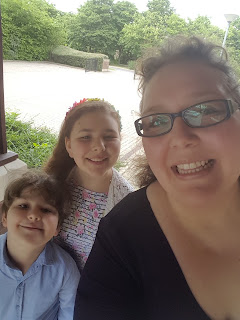 Well, sort of doing nothing. It was a rather wondrous day full of family time, TV catch up (it was raining most of the day), a couple of walks, a trip to a couple of shops, a bit of computer programming, an hour or four of gaming, new toys being purchased, new toys that we had purchased being tried out, crafting, Family Motto deciding, BGT watching and tweeting and somewhere amongst all the fun we managed to make pizzas together and watch a film on Netflix.

You see, Netflix had told us that the other day was Pizza Party Day in the US and we were determined that we weren't going to miss out and so decided to have a Pizza/ Netflix/ Camp out in the living room all night party... well, it was more an evening thing because I haven't the stamina to stay up all night these days!

Earlier in the day, Flyfour and I had visited a local Supermarket and purchased all the ingredients we thought that the children and we would need to create our own pizzas. I'd asked everyone what sort of ingredients they would like and so we had a good selection, including the extra bits and pieces we have in our stock cupboard and in the fridge and freezer.

Dan Jon and Top Ender both decided that they would have a BBQ sauce base on their pizza, because apparently they are odd. Dan Jon decided to be like me and have the herbs put onto his sauce base, where as Top Ender decided to add her herbs to the top of her toppings like Flyfour (which is obviously wrong). 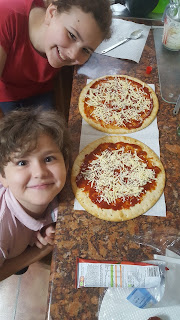 Top Ender went with Chicken, Sweetcorn and a smattering of Hot Dog and Ham whilst Dan Jon had a classic Hawaiian, with the addition of Hot Dog (because why not Mummy?!). Watching them make their pizzas was absolutely hilarious, Dan Jon carefully adding toppings in a pattern and Top Ender throwing items haphazardly over the pizza not caring about presentation but more about having a mouthful of flavour in every bite.

Whilst we cooked the children's pizzas I prepared a garlic bread pizza (half cheese, half plain) and my own pizza (Chicken, Sweetcorn and Mushrooms with a tomato base) and Flyfour made his own Pizza (Onion and Pineapple because the ham he was going to use got knocked onto the floor as he was clumsy!) and a gluten free Garlic Bread.

And then we all curled up on in our own spaces to eat and watch Netflix and despite it still being sticky (from the need for a good thunder storm and possibly a good rain storm) we also had blankets which the children kept wrapping themselves in much to the chargrin of Flyfour and I! 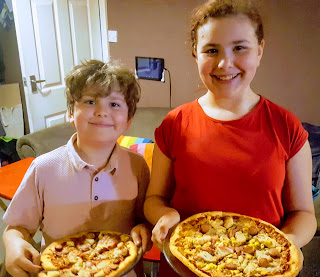 We originally planned just to watch just one film, but we watched one before BGT and then after the children had fallen asleep Flyfour and I were going to watch another, but all those carbs had knocked us flat and so we were in bed and snoring by half ten.

Luckily the children aren't used to staying up that late and so I planned on getting up as normal and having plenty of time to make a start watching House of Cards before they woke up. However in true typical Underwood style, the TV show didn't go live until 8 am and by then Dan Jon was running around and so I missed my window of opportunity, but I did get a lot of hugs!

It was a practically perfect day of fun, family and food.

As part of the Netflix Stream Team, I get a subscription to Netflix (which I had already!) and we got a voucher to buy Pizza supplies.
Family Life Netflix