The Pre-Cleaner Clean And The Illusion Of Perfection

- May 01, 2017
Talking to one of the playground Mums one morning last week, we got round to the subject that she had a man coming to clean her double oven that day. We had a bit of a giggle over how she claims that she never uses her double oven, but that it was still filthy and I asked which company she was using as I really needed to get my double oven cleaned. Well, actually that isn't strictly true. I mean sure I do need to get it cleaned, but what I really need is for it to be serviced and I don't want to have it serviced before I get it cleaned and I told her that. We had a giggle over my confession before the playground Mum admitted that the night before she actually gave her oven a quick clean in order to not be too embarrassed when the guy turned up the next day.

By quick clean, what I assume she was saying is she spent two hours scrubbing the thing to within an inch of its life. So I admitted that when I had the Viakal cleaners come round back in 2012, I had spent AGES cleaning my bathroom in the run up to their visit. I had basically done a deep clean every day for a week all so that when they came I could nonchalantly claim that my bathroom always looked like this. 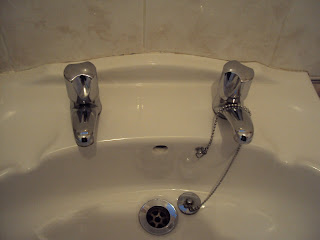 Again we giggled and we discussed what kind of person we would be if we had cleaners come into our home each week. We decided that both of us would totally clean up before the cleaner came, which is a bit useless seeing as how you are paying for someone to come in, but then doing the job you are paying them for before they get there!

It got me thinking.

Easter weekend Katie Price shared a picture of her house and got a bit of backlash about it. According to some on the internet, the mess that was showing in the background of her snapshot makes it seem that "she lives in a tip" and it would drive them "crazy" to live in such a mess. To others, it gave them relief that her home was like theirs. That not everyone does the dishes before they go to bed. That shoes get left in the middle of the living room but as usual, the negatives outweighed the positive on the articles that I read about it.


I must admit, a lot of my photographs are taken at certain angles so you can't see the pile of stuff still needing to be put away in the background. Or because the dishes haven't been done. In fact, don't look in the fruit drawer of my fridge because there is a weird stain in it that I'm not sure where it came from and I really need to give it a wash to get rid of it!

It's not like I'm ashamed of the way I live, I blog about it! I tell my friends about it! I take before and after photographs when I'm tidying up so I can show my husband! Heck, I even sent him a Skype message when he had gone to work because the previous evening he hadn't said anything about how clean our bathroom was (It was sparkling because I did a really deep clean on it!) and I needed him to acknowledge that. 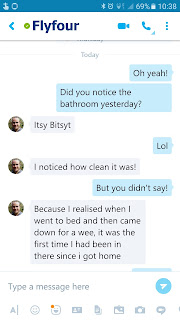 Now, I've never met Katie Price but I have a lot of respect for her and so maybe that clouds my judgement. It took me a good half hour to remember what her pseudonym was when she was a glamour model because she has developed her brand past that so much in the last few years (It was Jordan and yes I know I could have googled it, but I wanted to see if I could remember). She is a Mum, she is a business woman and I personally think she's bloody hot!

I was when I was thinking about the mess in the background of her photograph, and why I would have cleared it away or angled my photograph, that I realised why people were so angry and why I behave the way I do.

It broke the illusion.

It's the illusion that we all have it together that was broken, and why I think the people on the internet were so annoyed about when they could see the mess in the background of Katie's photograph. Here she is looking radiant on a Sunday morning, hotter than I could ever look and the rest of her photo didn't match the illusion that she has it all.

And that's it isn't it? The illusion that we are perfect. If Katie Price with her employees and money can't have a perfect home all the time then how can we?

That's why we would clean before a cleaner would come round because we are so worried about what they would think about us if they knew that we weren't perfect.

I might not be posting pictures of my mess anytime soon, but I might not clean my oven before the oven cleaner arrives. Okay well, I might not as clean for as long as I might have in the past. Baby steps people, baby steps.

Would you clean before your cleaner arrives or are you not worried about breaking the illusion? Let me know in the comments!
Chores Family Life