- June 02, 2017
Dan Jon Jr doesn't often go to the theatre and if he does, it tends to be to productions produced for children or shows like the Panto designed for families, and he loves them! He loves it, because like Top Ender he is actually a mini version of Flyfour and me, who as you know both love the theatre. As Dan Jon says;


So, when I was offered tickets to go and see Billy Elliot at the Milton Keynes Theatre and saw it had an age guidance of 8+, I asked if he would like to go with Flyfour or me to see the show. Guessing that I was probably the one who would let him eat more Ice-Cream and sweets than his Daddy, he picked to accompany me, which is why my phone is was filled with gifs like this;

The boy could gurn for England.

Now, Dan Jon hasn't seen the film, Billy Elliot, and other than a brief synopsis from me (It's about a boy that is told he can't dance, because dance is for girls and it's set in the olden days and it turns out he's a really good dancer) he wasn't sure what to expect. And to be honest, neither was I. I'd only seen the film once and I'm pretty sure I missed some of it because I fell asleep or turned the TV over... 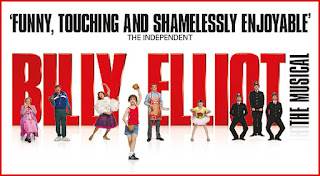 However, we were excited and as we took our seats JUST as the show started, we were transported back in time to the 1980's and to a Northern Town. I didn't hear a peep out of Dan Jon until the interval where he turned to me with his eyes wide and exclaimed: "THIS IS AMAZING!".

And I had to agree because it was amazing. The cast was riveting to watch and I couldn't take my eyes off of Hayden May who played Billy Elliot, or Henry Farmer who played his best friend Michael on the night we saw it. Also a shout out for Italia Ross, she was great as the dismissive daughter of Mrs Wilkinson and her portrayal of being secretly in love with Billie was spot on. The other children were also fantastic, they had an energy that could probably light up a thousand homes forever and have more talent in one little finger than I do in my entire body!

The rest of the cast were also great. Dan Jon and I loved Daniel Page as Mr Braithwaite who not only has some moves on him but a brilliant singing voice and the grumpiness he portrays the character with just pushes the comedic moments along brilliantly. Then again there is the HUGE Milan Van Weelden who plays Big Davey who I think may be the tallest man in Musical Theatre, who plays the comedic and the serious moments fantastically. 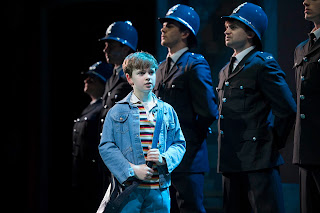 Dan Jon did squeeze my hands a couple of times when the intensity of the show was a little high and the first couple of times a character used language that we try not to in our home, but it was a brilliant show for him to see because I think it helped him to realise that not everybody has it easy. That not everybody has a life like him and that this very struggle is probably going on in hundreds if not thousands of homes right now and led to some interesting discussions on the drive home.

I was only about five or six when the coal miners strikes were on, but I found it very emotional seeing it on stage, knowing what was to come and this was even worse when (SPOILERS AHEAD) Billy and Mrs Wilkinson read a letter from his Mum, who died when he was nine years old. It was a good job Dan Jon had a packet of tissues in his jacket pocket as boy, did I need them!

Dan Jon loved the comedic aspects of the show (well so did I, but I wasn't still giggling about them five minutes later) and spent most of the evening amusing the couple behind us as his fits of the giggles over comedic lines and moments tickling them as much as the moments in the show.

If you are taking children to see Billy Elliot, please be warned that it is a long show, it has a runtime of three hours and of course a 15-minute interval in the middle. There is a lot of bad language and a few scenes which made Dan Jon squirm because of the intensity and situation. However, it is well worth seeingif you can make it and hopefully I'll be returning with Top Ender before the end of the run!

Billy Elliot The Musical is on at the Milton Keynes Theatre until the 17th June and on tour around the UK find out when and where on the Billy Elliot website. Tickets start from £18.50.