- June 26, 2017
Well, the list of Home Improvements that we created to help us focus our efforts this Summer is finally off to a busy start and these past few days I've had more Builders, Decorators, Roofer's, Installation Specialists and other men in shorts splattered in things like plaster, sweat and spilt tea than I think you could ever find in a Builder's Merchants, doing things to my house to make it a home.

The roof wasn't going to be the first works we had done, it wasn't even one of the works that we were looking forward to really. Don't get me wrong, we knew that the roof had to be done because there is only so much patching you can do when the roof is already a patchwork of patches! 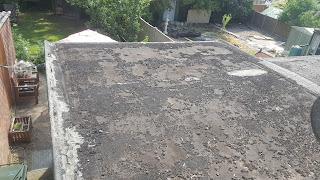 Flyfour was getting a little fed up of going up on the Kitchen roof in the rain to stop the collecting rainwater from drip, drip, dripping into our Kitchen and the Facias? Well, maybe the less said about them the better eh? 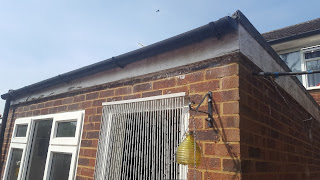 Flyfour and I knew that what we wanted was a rubber membrane roof. We've had samples from a few different roofing companies, that are great fun to manipulate this way and that trying to rip and none of us have managed it in the few months we've had them and the EPDM is good for 15 years, which should give us enough time to save up to do it again right?!

Eventually, we found a roofer we liked, who gave us a decent price and could complete the works in our timescale too, and he sent his crew round on Friday to change our flat Kitchen roof from looking like the above images 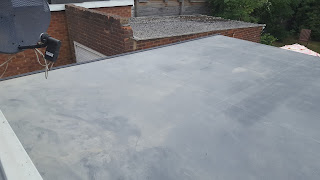 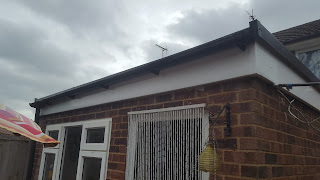 Quite a transformation right?

The chaps were great fun, with cups of tea being passed out of Top Ender's window to them (much easier than climbing them up a ladder) and a handy system for them to remember which one had sugar in and which one didn't. 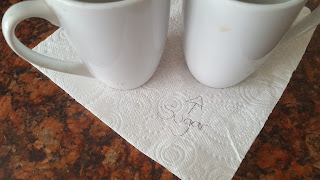 There was also a verbal agreement that if I did take pictures of them whilst doing the roof, that I could only post the ones which showed their best side. I'm not quite sure what is their best side, but this is the side I saw a lot of when sneaking a peek from Top Ender's window! 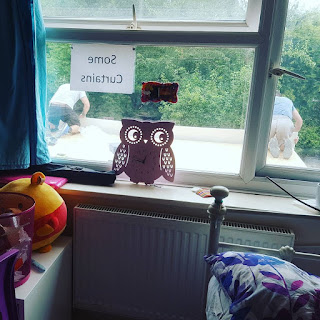 There were, of course, a few stages between the start and the finish, I don't know exactly what the technical terms are, but they cleared off the cruddy old felt and found out that the timber boards were actually in really good shape! 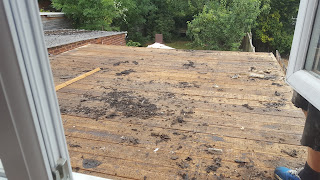 And then they put down some boards to (I assume) make the surface nice and smooth. 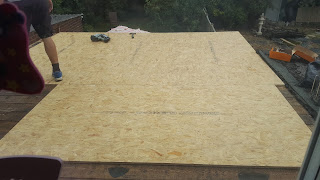 Before finally basically glueing the new membrane to the roof! 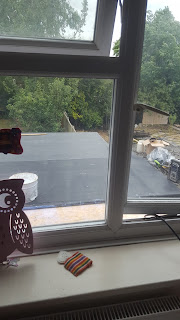 And so that's how we ended up with a lovely new Kitchen roof that is hopefully not only showerproof but English Summer proof!
DIY Family Life Home Improvements Making A House A Home