The Best Role Model For a Family?

Even if I have had to ban the family from watching the cartoon at least twice in the last few years. The show has it's fans and it's detractors but, what I think a lot of people don't get is that the Simpson family, is actually a pretty good role model for how a family should be, well in the first few seasons anyway, and here are my reasons as to why. 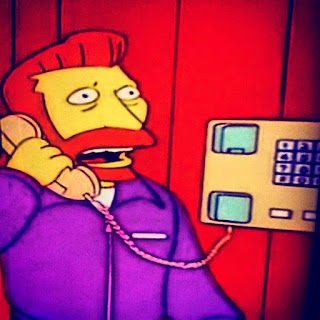 Yes, I'm aware that the above picture is a baddie, but he is my favourite character from The Simpsons.


Apart from lunch, they eat breakfast and dinner together. They might sometimes watch TV whilst they are eating but they do eat together as a family. How can a real family not look at this and see the positive re-enforcement being made to their own family?

They go to Church.


Okay, so you might not, but in general religion is about being nice to each other. It's about doing good and knowing that you have a great power looking out for you and wanting you to make all the best choices for you and your family. I think that's a worthy goal of all families.


It doesn't matter if they are a different religion, a different sexual orientation, a different race, or if they are vegetarians or vegans, or even a hundred other things that you could probably name that makes one person different from another. They accept them as a friend or a family member or part of their community. Sure they might initially struggle with the change, but with new information people can change their opinions.


They are a family, who despite their faults and at times dislike for each other are there for each other. They support endeavours which are doomed to failure from the start, they allow each other to go after dreams, to do what they are good at and it's this unconditional support that I want my family to feel and I'd hope you'd want your family to feel it from you too.


Well the adults do I was trying to think of a TV Show were the married couple have sex, or even admit to liking sex. Maybe I'm just not watching the "right" TV shows, but I can't think of a single show that has the main characters being intimate with each other in a loving and caring way rather than being duty bound or some other way.


They have addictions and they are sometimes short on money. They have homework and a job they hate. They have to deal with bullies and in laws. And yet they manage to do it, whilst still enjoying their life and they overcome their struggles. It all works out in the end. There is the great quote which I think should be applied to life.

“Everything works out in the end. if it hasn't worked out yet, then it's not the end.”


And that's pretty much how it is for The Simpsons. By the end of the episode, everything is back to normal (well most episodes), the lessons have been learnt and possibly applied and the audience are left with a happy feeling knowing that no matter what life throws at them they can cope too.

What do you think? Are the good values that are shown in the family dynamic of The Simpsons worth the negatives?
Family Life