- June 27, 2017
Ever since we moved into our current home, one of the things that I've hated is that the bathroom is downstairs opposite the front door. Ordinarily, this wouldn't really be a big problem, but the people who picked our front door picked one that was half glass and had a giant full-size window next to it.

This is really only inconvenient if you pee with the bathroom door open, or if you come out of the bathroom wrapped in a towel after a shower, or you forget to take a towel into the bathroom when you shower, or you run out of toilet paper and have to shuffle into the hallway to pick up a spare roll with your underwear around your ankles... 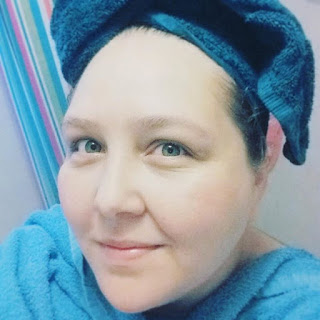 Yeah, I'm guilty of all of those things.

So Flyfour and I decided we wanted to change our Front Door and it was going to be the first thing that we were able to cross off our massive list of Home Improvements that we're working on this Summer... but then the door company cancelled our fitting appointment the evening before they were due to be coming out.

I rearranged our appointment and on the following Monday, we waited patiently for the crew to arrive. And we waited. And we waited. And then we phoned them up to say "Oi, where are you?" and discovered that they had accidentally forgotten* to add us to the schedule and weren't coming.

Yes, we were fuming at this stage. We are having a lot of works taking place this Summer and some of them can't take place at the same time as other works, which is why the doors being done was so important as we now had to push back our other contractors again. I was so annoyed I just left Flyfour to it and so he rearranged it AGAIN for the Saturday coming.

Which is why on Saturday just gone we were a little anxious as the morning was progressing and the fitters hadn't arrived! Eventually, however, a chap did arrive and despite Flyfour and I worried as he was on his own, he soon had the doors out and the new ones in!

Now the doors are in, I'm almost over the angst of the trouble of getting them and the rest of this blog post is much more positive!

So, a couple of days ago the front door started the day looking like this, well minus the Avon book. 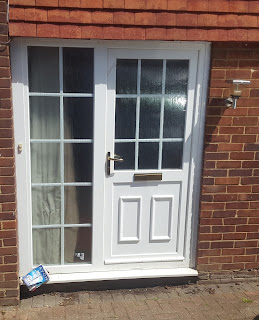 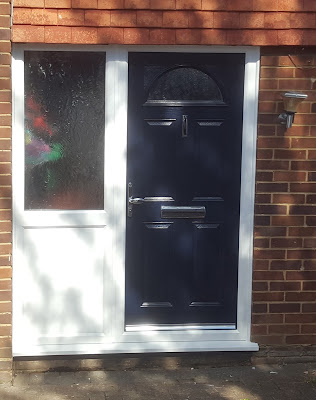 Beautiful huh? Well, I think the new blue composite door is beautiful... but that might be because I'm someone who pees with the bathroom door open, or comes out of the bathroom wrapped in a towel!

Keep an eye out here, on Instagram, Twitter and Facebook for more updates of our home remodelling as it's all go in the next few weeks!

*I believe that the chap intentionally booked it on a wrong day out of spite because I was not happy when he called up to cancel the first time! However, this is hopefully just my paranoia!
DIY Family Life Home Improvements Making A House A Home