A Year Ago Today

- July 13, 2013
At 9:47am one year ago today I tweeted that we were off to the hospital with Big Boy again. We'd been just a few weeks before, but had been sent home after further testing has told us everything was fine.

Just under one and a half hours later, we were letting the world know that we were pretty sure that Big Boy was going to be diagnosed with Type 1 Diabetes and it was a bit of a shock to be honest. I can't say express how much the comments from friends and family on my Facebook page and via mine and Daddy's Twitter accounts meant to us. I heard Oprah say recently, that if the only prayer you ever give is one of Thanks then that is enough. So to those who let us know we were in their thoughts and prayers, Thank You.

The day is a bit of a blur, but at the same time crystal clear. I can remember moments of the day as if they have just happened and other moments I forgot about until I looked back at the tweets and Facebook status updates that I made. I remember Big Boy had some magic cream applied to his elbows and the back of his hands, which had Big Boy screaming. We thought it was just due to him not liking being in the hospital, but we have since found out he has a mild allergic reaction to the magic cream, so it's no wonder he doesn't think that magic cream is magic. 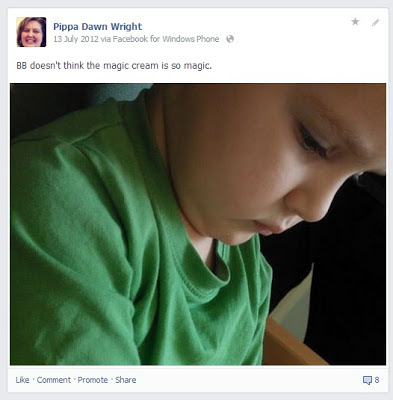 In some ways looking back at the day, makes me realise how far we have come. My blood phobia was still strong just one year ago, and when they were filling the vials of BB's blood I couldn't look for fear of falling on the floor in a dead faint. Now I can see blood and not only do I not pass out, but I'm also active in scooping it up!

And injecting Big Boy with insulin now, is so simple. We don't have to chase him around the house (we had to do that a couple of times at the start) we just ask him to come to us and he does. We've done it at Theme Parks, in cars, in hospitals, in shopping centres, in other peoples homes. Big Boy accepts it as part of his life now, as he does when I ask him if he is feeling low or high.

We've come to accept hanging around Hospital Waiting Rooms as part of life, I got quite an arty shot of an empty one once. We know to take something to keep us amused, something to drink (our local hospital seems to have the heating permanently on at the top of the thermostat!) and most importantly for me something to allow me to tweet. 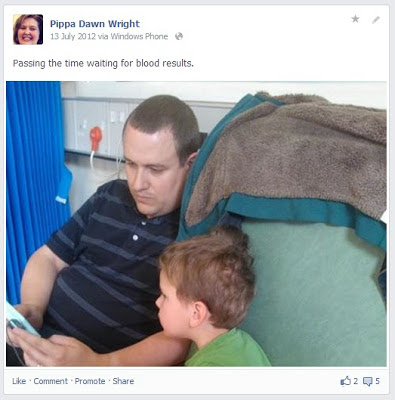 So today is the one year anniversary of Big Boy's diagnosis of Type 1 Diabetes. They say that the first year of anything is the hardest, so I'm pretty sure that despite this having been the biggest change to our family life, looking back we have coped pretty well and it can only get better from here.