- July 09, 2013
I was in Tesco's doing the weekly shop, looking for various bits and pieces that I could buy for Daddy as treats that would fit his dietary needs. I got to the quite small free from section that is in our local store (small compared to the other local supermarkets) and saw some Muesli that looked nice and seeing as it is on the Free From section new that it was going to be gluten free, or something. On closer inspection however it wasn't Gluten Free. It wasn't "anything" free.

I planned on carrying on doing my shopping until I found a staff member or manager, and eventually found a manager a few minutes later supervising the clean up of some smashed bottles of beer. I mentioned the issue to him and was initially dismissed as it having been my mistake, it wasn't just gluten free items in the free from section so the cereal was probably there because it was free from another allergen. 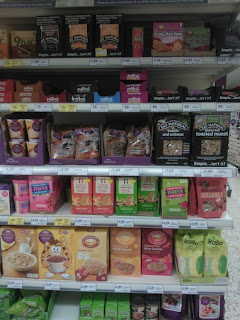 I explained that whilst he thought that might be the case, that this wasn't actually true. The Free From Section by Tesco's own definition is food free from Gluten and Wheat and I know this as I shop this section regularly and having foods which contain wheat and gluten next to products that are free from wheat and gluten could cause cross contamination and worse people expect to be able to pick up these items without checking and could cause serious health problems for some consumers. The manager looked a little annoyed, but went off to check (even though he was the Warehouse manager) and I left it a few minutes before venturing back round.

There was staff member removing the cereal from the shelf.

My complaint had caused the manager to check, find out that I was correct and they were sorting the issue out. Even though I was slightly disappointed that Tesco had made the mistake in the first place, I was really pleased that they had dealt with the situation so fast.

I learnt from this that if you are annoyed by something then complain and change can happen... now what shall I complain about next?