- July 02, 2013
I was talking with my Sister the other day about my blog, I was in the middle of the redesign and was getting some user feedback about the new design, the ease of use and the like from her (and a few other friends and readers thank you for that btw) when she suddenly declared that I don't blog about my cats enough. It put me in mind of the History of Blogging slide that Baroness Susan Greenfield showed in her lecture at BritMums Live. I had put it up on instagram at the time as the History of Cat blogging, but my sister had somehow missed it (I know how terrible she doesn't hang on to my every word!). 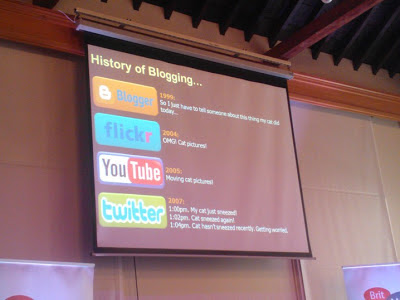 She was right though. I haven't blogged about my cats enough, for the feline lovers amongst us that is, I'm sure the rare mentions the cats get are more than enough for those who hate cats!

The thing is though, I'm not quite sure what exactly to say about the cats.

I could tell you about Tabby, who is my cat. Technically her name is Tabbitha, because I always wanted a cat called Tabbitha (with a double b on purpose) although mostly I just call her Tabs. She sits with me no matter where I am, and is a one woman cat. She never sits on anyone else's knee and only lets me stroke her, although Tops has managed to get away with it once. Tabs and her brother were rescue cats, which I always thinks makes it sound like she should have a Whiskey barrel round her neck. 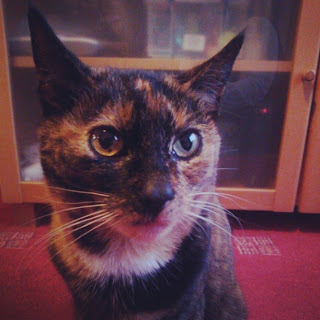 I could tell you about Moses who is Daddy's cat. Daddy called him Moses after the cat in one of Joshua Kadison's songs. Moses has a ginger diamond on his chest and is one of the only cats I know who likes to sleep not only on his back, but also crosses his arms as if pretending to be dead. Moses is often found on the back of the sofa, or in front of the bookcase and he pretty much lets anyone stroke him, but only Daddy gets away with cradling him like a baby. Moses almost died when he was younger as he developed a Urethral Blockage, but our Vet operated and saved him. 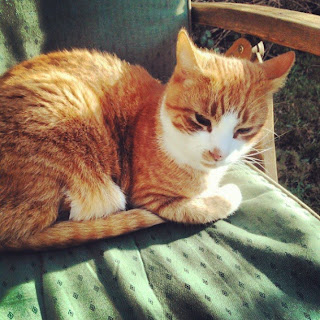 I could tell you about Willow who is Top Ender's cat. Top's called her Willow after her favourite kind of tree, and despite being a good few years younger than Moses and Tab's she is the biggest cat out of all of them! Willow did have a bad name in our house for a little while, as she appeared to be quite evil, but she has mellowed out with age and is becoming an anybody's lap cat... although she does use her claws a little too often to ensure a comfy seat. 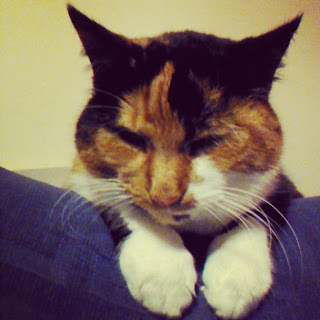 We are hoping to get another cat, for Big Boy to call his own. He has a few ideas about what he'd like to call the cat, which has to be a boy, and he's pretty sure he'd like a black and white one best. I'm not sure when this will happen, but I'm hoping for BB's sake it will be soon!

So, what do you think? Should I blog more about my felines and if so what about? Do you have any pets and why are they called what they are called?