When I drove a Volvo or My Audition for Top Gear

I know a bit about cars, not a lot, but enough to let me talk to people who do know things about cars and I know enough that when Volvo say;


"Come on out to Sweden where we'll show you some rather clever technology that we're working on to put into all our cars from the end of 2014 and we'll even let you test some of it out if you want..."(They may not of said this exactly) 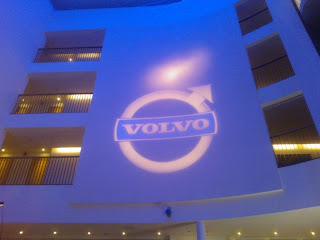 So, I flew out to Sweden (which I only got to see a tiny piece of but have to say it's really pretty) and mostly looked at a lot of trees as I was driven to my hotel. Once in my hotel room, I looked out to see more trees and I think part of a golf course and then got to eat really nice food in a restaurant that looked out to yet more trees. And the next day I got taken to Volvo HQ (again there were more trees there too) where I heard lots of interesting facts about safety in cars, got to see what happens when two Volvo's hit each other and the damage a moose can do if you hit one, when it comes out from behind a tree... not so much a problem in the UK as in Sweden I imagine.

Then the fun bit happened, I got to drive a Volvo.

Actually I got to drive several Volvo's and have a bit of fun with the new Technology, which you can see if you watch this video, which I'm titling;

My Audition for Top Gear

So there you go, lots of tech, lots of driving and lots of clever Swedish Engineers. I'd be a perfect fourth wheel for Top Gear wouldn't I?

I was flown out to Sweden to try the new Tech out for myself, it's rather clever and now I want a Volvo.