- September 21, 2012
I love September. For me it's an important month because it's the month I think of the year starting. We are back to School and Daddy and I were married so it was the start of my married life too! I love to think of September as the last part of the Summer, but as it is cooler it means that it's a time for camp fires and blankets and sitting on the beach in the Sand Dunes with picnic blankets round your shoulders... so I came up with a plan. A couple of weekends ago, on what we thought might be the last warm day of the year I had a plan for a camp fire in the back garden, thanks to an Eco Grill that had been sent to us.

We started off the evening by roasting hot dogs over the fire, the children thought it was great fun although they weren't too keen on the smoke that blew in all directions thanks to an all directions wind that picked up. Daddy and I thought it was great, we loved cooking over an open fire, it's so different to cooking on a BBQ! The great thing too about the Eco Grill was that the food got smoked and gave a really lovely taste to the Hot Dogs. 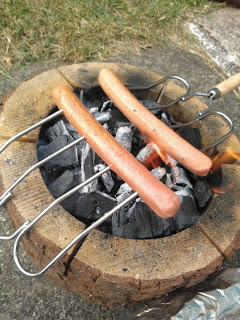 The children did have a little go, but soon got bored of holding the forks over the fire and so Daddy and I were doing most of the cooking, but it was so simple we didn't care. Top Ender and I are Sweetcorn fans and so I had added a couple of cobs in tinfoil to the coals in the fire and just occasionally turned it as I didn't want the sweetcorn to be burnt on one side. 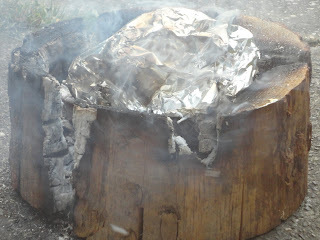 After we had the hot dogs and sweetcorn we decided to roast marshmallows and make some S'mores. The children loved toasting the marshmallows over the fire, although they weren't too good at it. Making up the S'mores was even easier, we put the toasted marshmallows in between two digestive biscuits with a little square of chocolate and the children thought this was the best pudding ever! 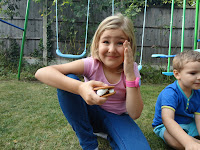 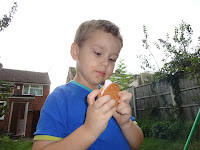 It was whilst we were making the S'mores and commenting on how sweet the sweetcorn had been that Daddy thought about popping some popcorn. As you can see in this little video, popping popcorn is rather fun over an open fire!


After we had eaten and cleared away all the food we sat around the fire watching it burn down. It was just like in all the books I have read where the hero or heroine sit around a fire with a blanket around their shoulders to keep warm. The only thing we didn't have was a guitar to strum! After a while when the camp fire was starting to burn itself out (by burning itself all up) we set off a few fireworks to mark the end of summer. 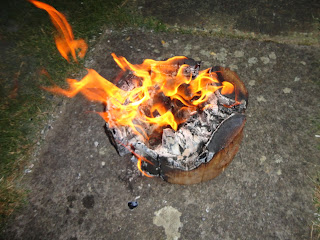 I know that Top Ender is always asking if we can make something an annual thing, but having a camp fire at the end of summer just to say we were here, we spent time together, we enjoy life is a great way to mark the end of Summer and I can't wait to do it again at the end of next Summer.

We were sent an EcoGrill which was rather cool!