How We Survived An Overnight Hospital Stay

- September 06, 2012
One of the first things that our Diabetic care team told us was that at some point in the next year we'd end up staying over night on the children's ward at the hospital. I just didn't expect it to happen six weeks after BB was diagnosed.

Last week, on the Bank Holiday night Big Boy was showing some of the signs of Diabetic Ketoacidosis, his blood sugar was rising for no reason and we were worried enough to call the Children's ward who asked us to come on down. Daddy and I made the decision that I would go with BB to A&E and that Daddy would stay at home with Top Ender. At this point it was just after Midnight and I knew that there was a high chance that we were going to be kept in over night, so I packed a couple of overnight bags and set off to the Hospital. 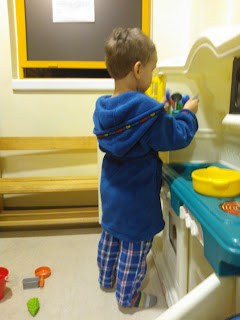 Come 3am when they tested BB's sugar levels again and found that he was now suffering a low it was decided that we had to stay overnight just to check everything righted itself in the morning. Being taken to the children's ward in the middle of the night with a sleeping Big Boy in my arms felt wrong. I wanted to tell the Doctor and the Nurses that I knew my own child and that he was fine now and that we had just been over cautious because this was the first time this had happened but I knew that they were also doing this for the exact same reason. They had to be careful, they had to make sure that there wasn't anything else happening just in case, and you can bet had they sent us home that BB would have exhibited more signs and symptoms and we would have just had to come right on back. 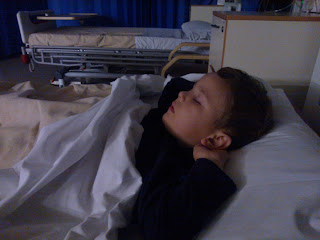 Big Boy didn't wake up at all as the Nurses on the ward checked his blood sugars, his temperature and asked me for his history again. They left me alone with him, and I sat on the chair next to his bed thinking about how I was going to sleep. Would it be better to doze in the chair, make BB cry so I could climb up next to him and sleep on the hospital bed with him or just sit awake all night? And with that another Nurse took pity on me and brought a special chair round for me that turns from a chair into a bed. I was impressed, even more so when she brought through a couple of pillows, sheets and blankets for me to use too. 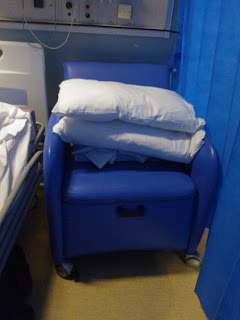 I didn't think that I would manage to get any sleep, but knew it was important to try. I could hear the Nurses chatting about their lives, I could hear other parents and patients coughing, parents soothing children who had woken up, a few machines that beeped and hissed (but in a reassuring way) and eventually it all melded into a lullaby that helped me drift off. For an hour as that's when the next blood test had to be done on BB.

When it was officially the next morning (as in everyone was awake and not just me and the Nurses) we got ready for the day and only a couple of hours later were able to go home. Big Boy didn't react as badly to being at the hospital as I thought he might have, there was no hysterical screaming that he wanted to go home, no tantrums that he couldn't have snacks when he wanted or that his breakfast wasn't his usual menu options or that Nurses kept poking him. 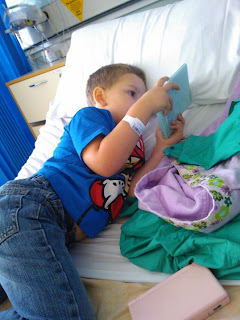 I realised something as BB curled up on his bed playing with his DS waiting to be discharged. We survived an overnight hospital stay, yes I was running on empty having only had a couple of hours sleep but we had survived and I knew now that the next time when we were admitted to hospital because BB was really ill that I wouldn't be struggling to understand the rhythms of the ward or to understand that the Nurses and Doctors would ask the same questions again and again and again but I would understand that this was just their way of making sure that they had all the information they needed at any given time.

I'm not looking forward to our next hospital visit, but I know that I'll understand it.