Barbie and The Popstar Film and Doll

- September 12, 2012
Top Ender loves Barbie. She has since she was tiny and I think that she will until she is old and grey, which is a good thing because as long as she loves Barbie it means I get to watch the films with her and sing along to all the songs that everyone in the house invariably learns because of the constant playing of the DVD! The latest film to be released in the Barbie series is The Princess and The Popstar, which is a modern retelling of The Prince and The Pauper by Mark Twain. 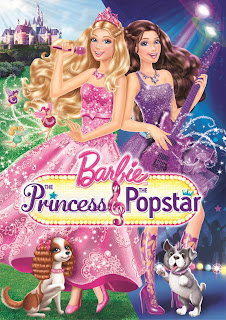 The story this time is about a Princess called Tori who wishes for something else in her life. She loves being a Princess (who has a magic hairbrush) but hates having to take orders all the time and dreams of being a Popstar like her favourite singer Keira (who coincidentally has a magic microphone) who just happens to dream about being a Princess who gets to do what she wants to do instead of being bossed around by her manager who was once a Top Singer too.

The girls meet and change places, and experience what life would be like if they got to be what they dreamed of but of course before the end of the film they realise that being themselves is what is best and they have to spoil a plot to stop them both having their lives destroyed. The film has funny moments, serious moments and is a great family film, even Big Boy has sat down to watch it a couple of times with Top Ender.

Top Ender was also lucky to receive a Keira Barbie Doll from Mattel, she has loved acting out scenes from the film and having Keira perform different concerts for her other Barbie Dolls. She loves that you can swivel Keira's hair and clothes round to make her Keira the Popstar or Keira the Princess and that she can perform two songs from the movie. 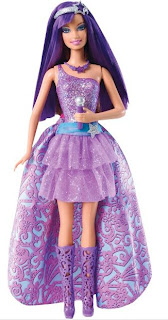 There is one extra bit of good news about the film. My favourite of all the Barbie films is Barbie Princess and The Pauper, so when I found out that they were making a new version, I was hoping that they would put some of my favourite scenes or songs in as a tribute or a nod to the previous version. AND THEY DID! My favourite song was given a pop treatment and included (it's To Be A Princess if you are interested) and it made me love the film even more.

We received a review DVD, Tickets to go and see the film at a local Cinema and a Barbie Doll to review.