- September 25, 2012
School has been back for a couple of weeks now and both Top Ender and Big Boy are in full swing of coming home after school, changing out of their School Uniform and then getting in to their after school clothes. I do have to keep reminding them that they need to give me their dirty uniform so that I can wash it, but they seem to be ignoring me on that part and I keep finding discarded pieces of uniform all around the house which I gather up to wash so that they are ready for the next day. I was really worried about Big Boy having his first PE lesson as I was sure that he was going to come home wearing Uniform that didn't belong to us because of his habit of stripping off and leaving his uniform where ever it landed. 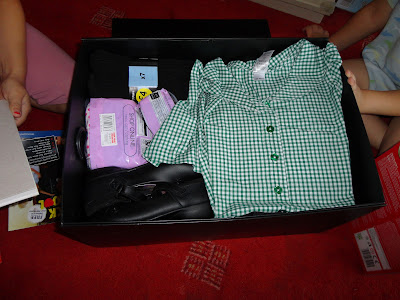 So the PE Lesson happened. Big Boy used up lots of energy running round and had a low blood sugar because of it (which was sorted out before lunch) and so his teacher helped him out by putting his PE Kit back into his bag for him. That evening when he walked out of the School Gate, instead of wearing the Tesco School Uniform that I had sent him to School wearing he was wearing a jumper with the School logo on. Something that Tesco don't sell and I didn't buy.

I knew it would happen, Big Boy was wearing somebody else's uniform.

Big Boy's teacher was standing just by the gate, so I asked her if there was a Tesco Knit jumper in the classroom that might belong to Big Boy. She was quite certain that there wasn't but as I had named all of the clothes that Big Boy was going to be wearing at School she was also certain that his jumper would be returned tomorrow and was more than likely to have been taken by the child whose jumper Big Boy was wearing. The teacher looked into the back of the jumper Big Boy was wearing to find out whose name was written in it and looked confused. So I took a look.

Neatly written on the label was Big Boy's name. In my handwriting.

I may have never brought a School Jumper for Big Boy or Top Ender but I had been given a few by High Heels Mum and had completely forgot that I had placed one of them in Big Boys PE bag for outdoor PE! I had to laugh as I explained the situation and the Teacher explained that she may have put BB's Tesco jumper into his PE Bag, which a quick check confirmed.

Daddy says this story has no point and that it needs something more; maybe a troop of Dancers or an explanation that I was worried that the good Tesco Jumper was being replaced by a slightly faded School jumper... Really though it's like most of my stories, it doesn't have a point other than letting you all have a good laugh at me!

We were sent Tesco School Uniform for both Top Ender and Big Boy.