What I Made With The Heinz Five Beanz

- September 08, 2012
Earlier this week when I was off gallivanting with my Mum at Red Hot World Buffet I made a slow cooker meal for Daddy and the children to eat, so they wouldn't miss me too much. Apparently the one night that I wasn't here and prepared a meal in advance was also the one night that the children ate dinner without complaint and kept going on about how amazing it was. Either I should go out more, or I should make this more often.

The meal of course was a Sausage and Bean Casserole. Luckily there were leftovers and I was able to sneak a bowl for lunch before Daddy stole the rest away for his lunch at work. 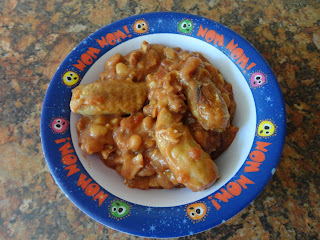 I have made this a few times in the past, but this was the greatest success I've ever had with it and so I thought I would share the new recipe so you could see if it would work for your family too.

Pack Sausages - Cut in half (we use M&S Gluten free ones, but use your favourite)
Pack of Bacon - Chopped in to smallish pieces
Can of Heinz Five Beanz
Can of Chopped Tomatoes
Two tablespoons of Gravy Powder (I used Chicken not sure why)
One tablespoon of Tomato Ketchup
Salt and Pepper to Season

One tablespoon of oil to fry with (I use Olive Oil)

Take the sausages and gently fry them in the oil for a few minutes so that they get a nice colour to them. Don't worry if it is an even colour or if the sausages are cooked through as this is just to make it look nicer when served.

Add the can of Heinz Five Beanz and chopped tomatoes to the Slow Cooker bowl. Mix them together along with the two tablespoons of Gravy powder and the tablespoon of Tomato Ketchup.

Add the Sausages to the mix and the chopped bacon. I didn't cook the bacon as I wanted it to basically boil/steam in the slow cooker and release the juices into the beans and chopped tomato sauce.

You can either Season the dish now, or wait until it is served. I did it now because I'm impatient.

Turn the slow cooker on to a low heat and let cook for the next five hours or when ready to eat after that. (that's the brilliant thing about slow cookers you could make it cook for ten hours and it would still be moist because of that lid keeping the moisture in).

When ready to serve add a side dish (Daddy added Mashed Potatoes), but remember that your beans count as one of your five a day so if you didn't want to add a side of vegetables to the meal you don't have to!

So I'm not really sure what made it so tasty. Was it the beanz which weren't my normal mixture of beans but a preselected grouping by Heinz? Was it the Gravy powder (which you couldn't taste in the sauce) or the tomato ketchup? Or maybe it was that it was cooked in the slow cooker all afternoon. Whatever it was, it's going on my menu again in the future.